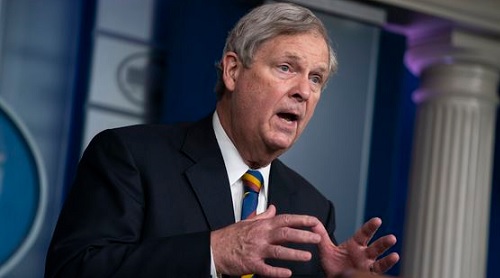 A group of American farmers, all of them white, is suing the government for race-based discrimination, alleging that the U.S. Department of Agriculture (USDA)’s loan forgiveness program for farmers of color is a violation under the Constitution.

“All of my clients just want to be treated equally,” Daniel Lennington, deputy counsel and lead attorney for the lawsuit, told Yahoo Finance. “They’re not looking for any special treatment. If there is a loan forgiveness program, they want it to be open to everyone, regardless of race. And if the USDA would like to formulate the loan forgiveness program to help farmers who have a particular need, my clients would be all in favor of that.”

The program, which allocated roughly $4 billion for “socially disadvantaged farmers, ranchers, or forest landowners,” is part of a larger stimulus bill signed into law amid the coronavirus pandemic.

“Socially disadvantaged” in this case is defined as relating to groups “subjected to racial or ethnic prejudice because of their identity as members of a group without regard to their individual qualities.”

Agriculture Secretary Tom Vilsack previously stated that Biden administration policies aim to “root out whatever systemic racism and barriers may exist at the Department of Agriculture directed to Black farmers, socially disadvantaged farmers, and people who live in persistently poor areas of rural America.”

Eligible farmers would see up to 120% of their outstanding debts paid off as a result of the American Rescue Plan, with the extra 20% going toward taxes associated with the outstanding debt. An additional $1.01 billion in the bill will be provided for outreach, training, education, technical assistance, grants and loans, and funding for improving land access.

The lawsuit argues that the Constitution “forbids discrimination by the federal government against any citizen because of his race.” Therefore, according to the plaintiffs, any race-based classifications “must be subjected to the most rigid scrutiny.”

John Boyd, president of the National Black Farmers Association, told Yahoo Finance that the lawsuit “shows the troubling pattern, and it looks like we’re going back in time in history where they just don’t want Blacks to have anything and be willing to be treated with dignity and respect. That’s it.”

Boyd stressed that Black farmers were facing problems related to discrimination and lack of government support long before the pandemic.

“I’ve been trying to get debt relief for Blacks and other farmers of color for over 30 years,” he said. “This wasn’t a new request at all. When I first heard about the [new lawsuit], I immediately thought about history where Blacks were enslaved, Native Americans lost all their land at the great of many white men.”

The agriculture commissioner for the state of Texas, Sid Miller, also filed a lawsuit against the stimulus program for farmers of color, calling it unconstitutional.

Asked about Miller’s lawsuit, Boyd noted that “eight out of 10 Blacks in the state of Texas who applied for federal aid were denied. So instead of filing a suit to complain for white farmers, why isn’t he doing something to help Black farmers in his very own state obtain access to credit that USDA and other state agencies where he could be more helpful to farmers of color there?”

‘There’s a lot of hardship in the farming community’

Farmers across the country were struggling amid the Trump administration’s trade war with China, a top importer of American agricultural products, and then saw prices plummet in 2020 due to a lack of demand amid the coronavirus pandemic.

The Trump administration created the market facilitation program (MFP) to offset the effects of the trade war, directing about $24 billion to American farmers. About 99.5% of the initial payments went to white farmers.

In 2020, the USDA established the Coronavirus Food Assistance Program (CFAP) to provide billions in financial aid to farmers impacted by the coronavirus pandemic.

The Environmental Working Group (EWG) found that as of October 2020, nearly 97% of the $9.2 billion in CFAP aid that had been distributed went to white farmers. Furthermore, white farmers received on average eight times more in aid ($3,398) than the average Black farmer ($422).

According to Lennington, all of his clients have been “hurt very hard” by the pandemic. Additionally, he said, more than 50 farmers from around the country who’ve also suffered through the pandemic are interested in joining the lawsuit.

“Adam Faust, our lead plaintiff, had to reduce the supply of milk that he had because the prices of milk crashed when the pandemic struck,” Lennington said. “I’ve talked to other clients who have experienced very high fuel prices and fertilizer prices. Other clients have talked about how the price of ranching land has gone up.”

Meat processing plants were also ravaged by COVID-19, creating a major supply chain disruption for hog farmers. As of February 2020, at least 250 workers died from the virus, while more than 50,000 have been infected, ProPublica reported. The number of cases forced many meatpacking facilities to close down temporarily, which created a major financial blow for meat producers.

“I’ve talked to a client who has hogs, and they had to euthanize several hundred hogs in one day because the price of pork fell dramatically when COVID struck,” Lennington said. “A lot of the pork processing plants had to shut down because the factory workers got COVID.”

Another issue that the pandemic created, Lennington said, is a labor shortage in the agriculture sector.

“They’re having trouble finding workers,” he said. “The price of labor’s going up. Although you might look at the commodity prices and see they’re going up and think ‘it’s a good time to be a farmer,’ you also have to look at all of the inputs. So it’s very narrow profit margins on each acre of land right now.”

Overall, according to Lennington, the farmers bringing the lawsuit want to be able to apply for the stimulus.