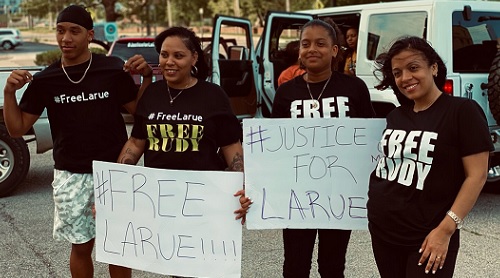 A Black Army veteran from Oklahoma was charged with first-degree murder after he fatally shot a burglar trying to break into his marijuana business last year. According to the Oklahoma Times, the man has been released on a $400,000 bond, with the bond paid by Black Lives Matter Oklahoma.

LaRue Bratcher, 34, fatally shot Daniel Hardwick, 42, back in May 2020 after Hardwick attempted to break into Bratcher’s grow operation for the second consecutive night.

“He was trying to break in when the business owner, who was inside the business at the time, apparently opened fire with a handgun, striking and killing the man who was breaking in,” according to Master Sergeant Gary Knight as reported by KFOR.

Bratcher called 911 after the attempted robbery, but the police checked in with the Oklahoma Medical Marijuana Authority and found out that Bratcher’s license had expired. Bratcher was arrested for operating a grow shop illegally, a felony, and was held on a $5,000 bond. He was not, however, initially arrested in Hardwick’s death. In addition to arresting Bratcher, authorities also seized 480 marijuana plants worth an estimated $1,500,000.

A day after the arrest, Bratcher was released on bond. A week later, the city’s district attorney’s office reviewed the case and upgraded Bratcher’s charges to second-degree murder. In another one week following the charges upgrade, things escalated further. The police raided Bratcher’s home, taking him, his children, and his wife to the street before being arrested again. Then, after he refused to accept a plea deal late last year, Bratcher’s charges were upgraded to first-degree murder.

His trial date was delayed until later this year. Enraged Bratcher’s family and friends and the Oklahoma City community members took to the streets, saying the murder charge is unjust.

Prosecutors, however, say that because Bratcher operated his grow business without a license, he was felonious, and any self-defense clause is thrown out. Bratcher was released on Tuesday, June 14, after appearing for a bond hearing. He’s required to remain under house arrest until his trial in October.

“Someone broke into his place,” Bratcher’s uncle Derrick Neighbors said at a rally for Bratcher. “He didn’t go out looking for trouble. He was in his place of business.”