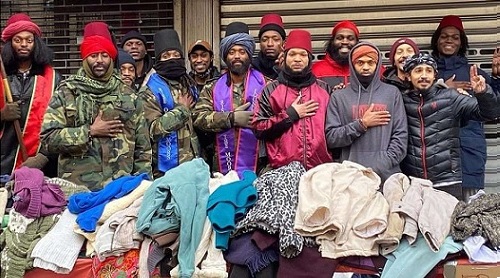 OPINION: In a country that cannot control its white supremacy problem, an existential threat to this nation’s multiracial democracy, the focus is always on the Black boogeyman

Six months after a mob of white folks tried to take over the federal government, white right-wing domestic terrorism remains the greatest threat to America. And yet, America needs the narrative of the Black boogeyman and will focus on that, and dismiss the threat coming from white supremacists.

Over the July 4 weekend, an “hours-long standoff” between Wakefield, Massachusetts police and “Rise of the Moors” received more media attention and news coverage than a Philadelphia march of white nationalists called Patriot Front.

Eleven members of the Rhode Island-based Rise of the Moors — a Black nationalist group formed decades ago in the spirit of Noble Drew Ali of the Moorish Science Temple of America and Elijah Muhammad of the Nation of Islam — were arrested following a highway traffic stop. The group was headed to Maine for training and had camping equipment. Police reportedly noticed the men, armed and with military gear, parked on the side of the road on I-95. The police reportedly asked the men for driver’s and gun licenses, which they did not produce.

The Rise of the Moors considers themselves indigenous people and American nationals but not U.S. citizens. Despite the Southern Poverty Law Center labeling them as an anti-government, anti-police sovereign-citizens group, the group’s leader, Jahmal Latimer, also known as Talib Abdulla Bey, denied this characterization and said he sought a peaceful resolution with police. Brother Gary Dantzler, leader of Black Lives Matter Rhode Island, said the Rhode Island-based Rise of the Moors are not violent terrorists, but rather are all about Black liberation and empowerment, the Second Amendment right to bear arms and respect for the law — their own laws rather than White America’s laws.

Meanwhile, in Philadelphia, an estimated 200 white supremacists from the group Patriot Front marched in Center City in full Nazi regalia, with black shirts, tan pants and white face masks, and carrying shields and flags. Reportedly from Texas, they shouted “Reclaim America” and “The election was stolen” — a reference to Donald Trump losing the 2020 presidential election to Biden — set off smoke bombs and had verbal exchanges with passersby. While “angry onlookers” chased them away, one can only imagine the reception these fascists would have received had they marched in North Philly, where many Black folks live.

Formed in 2017 in the wake of the “Unite the Right” rally in Charlottesville, Patriot Front calls for the formation of a white ethnostate, according to the Southern Poverty Law Center, says Black people are not American, and calls nonwhite people “replacement populations” that are a threat to Europeans.

In a country that cannot control its white supremacy problem, an existential threat to this nation’s multiracial democracy, the focus is always on the Black boogeyman. There was racism in the media coverage of the Rise of the Moors, with references to Black Identity Extremists, a term the FBI created out of whole cloth to describe groups that do not exist. An overwhelmingly white agency with a long history of criminalizing, infiltrating, and neutralizing Black political groups and assassinating their leadership, the FBI might as well have called them “Scary Black Men.”

And we know how scary Black people with guns are to White America.

Some in the Black community are not exactly against armed Black folks as protection against white terrorists, as history demonstrates, from Nat Turner and the Deacons for Defense to the Black Panther Party and the NFAC. Martin Luther King Jr. was nonviolent, but he and the rest of the civil rights movement depended on guns to protect lives. However, the reality is that Black people are branded as violent whether they are armed or not.

The FBI viewed Dr. King as the “most dangerous” Black leader in America and wanted him destroyed, even told him to commit suicide. And J. Edgar Hoover viewed the Black Panthers as “the greatest threat among the Black extremist groups to the internal security of the United States,” and their children’s free breakfast program “potentially the greatest threat to efforts by authorities to neutralize the BPP and destroy what it stands for.”

Today, the white nationalists in the Republican Party regard Black Lives Matter as terrorists, and athletes such as Colin Kaepernick and Olympian Gwen Berry as un-American for protesting against racial injustice, even as the GOP itself is fresh off an unpatriotic U.S. Capitol terrorism spree.

While America has ignored the problem of white supremacy for over 400 years, the nation can no longer brush off the threat it poses to democracy. This is why white nationalist protests are serious business, and themselves a serious form of violence. Groups such as the Patriot Front, Oath Keepers, Proud Boys and Three Percenters have a track record and have been emboldened by Trump over the past several years.

Now, white supremacists are showing up and showing out, supported by their allies and coconspirators in the government, their corporate seditionist funders and backers. This is why we must take white nationalism seriously rather than fall for the okeydoke and get sidetracked over what some folks have named as the Black Boogeyman du jour.