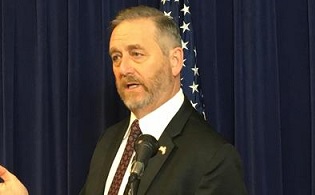 Ohio Attorney General Dave Yost has rejected a proposed statute that would have put a recreational marijuana legalization bill in front of the state legislature.

Yost said the summary of the statute is not a fair and truthful representation of the proposed law. The letter Yost sent to the group behind the bill said there are seven defects in the submitted summary.

The petition does not seek to enact a single law but instead add an entire chapter to the Ohio Revised Code, he said.

Now it’s up to the group Coalition to Regulate Marijuana Like Alcohol to fix the problems and resubmit the proposal if they want to keep moving legalization forward.

A spokesman for the group behind the effort said they’re reviewing Yost’s decision and plan to resubmit language in the near future.

The Act to Control and Regulate Adult Use Cannabis would let people 21 and older buy, possess, grow and use pot. Revenue from a 10% tax would go to education, addiction treatment and local governments.

The coalition said in March it wanted to pursue a constitutional amendment, but then in late July changed plans to ask Ohio lawmakers to legalize recreational marijuana.