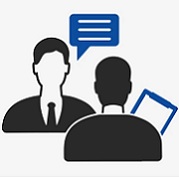 At the end of a job interview, it’s likely your interviewer will ask you if you have any questions for them — and if you don’t ask anything, this could be seen as a sign of disinterest. It’s important to remember that this is still part of the interview, so you should use it as an opportunity to show a genuine interest in the role, the team and the organization by asking the right kinds of questions.

A smart job candidate will have these questions prepared in advance, but knowing exactly what to ask can be tricky. So Zety, a resume builder and career blog, asked over 500 hiring professionals what questions they expect to be asked by candidates — and found that these are the top 10 questions you should be asking.

Can You Show Me Examples of Projects I’d Be Working On?

“You should definitely ask about the actual pieces of work you’ll be getting your hands dirty with,” said Jacques Buffett, a career expert with Zety. “This shows a keen interest in the specifics of the role, which will be sure to help impress the employer.”

In addition to impressing the interviewer, it can also give you valuable insights into the role that you may not be able to get from a job description alone.

“By asking about examples of projects, you’re getting a fuller picture of the work you’ll be doing on a day-to-day basis,” Buffett said. “It might confirm that this is indeed your dream job, or it might just tell you that this isn’t the job for you. And if you have multiple rounds of interviews, it’ll help show you what sort of professional achievements you should bear in mind when discussing your abilities.”

What Are the Skills and Experience You’re Looking for in an Ideal Candidate?

“This proves you really want to drill down and discover what’s needed to succeed in the role,” Buffett said.

He recommends asking this during a formal interview, rather than during an initial phone screening.

“Asking it before a formal interview will probably sound a little like you’re trying to cheat,” Buffett said. “But ask it to close off a formal interview and you’ll be showing that interest, getting the interviewer to open up a little, and discovering even more about what you might expect from the job.”

What Are the Most Immediate Projects That Would Need To Be Addressed?

You should ask this in addition to the more general question about the types of projects you will be working on.

“By asking about immediate projects, you’re showing an interest in hitting the ground running and making a contribution from day one,” Buffett said.

“Here you’re showing an interest in the realities of the job,” Buffett said. “By asking this, you’re showing you want to fully understand what it is you’ll be doing. And if you’re being interviewed by someone who works on the same team as you, this will encourage them to open up. People love talking about themselves and what they do.”

Do You Expect the Main Responsibilities for This Position To Change in the Next 6 Months to a Year?

Asking this question demonstrates a longer-term commitment to the role.

“You’re showing you want to excel in the medium-term future too by developing a more fine-grained understanding of how business needs will develop,” Buffett said. “It may very well be that your responsibilities will stay unchanged. But by asking the question, you’re showing you have your eye firmly on the ball moving forward.”.

Is This a New Role That Has Been Created?

This question shows both your interest in the role and in the broader business — it can be a good indicator of whether the company is expanding or holding steady.

“You’re showing you have an interest in the business context that led to the vacancy and the broader state of the organization you’re applying to,” Buffett said.

Are There Opportunities for Advancement?

“This question harks back to long-term commitment,” Buffett said. “You’re proving you want to stick around, grow and make a greater contribution to the organization. And that growth-minded mentality is incredibly important. Businesses need change, and continued success demands agility and growth. By asking this question, you’re proving that you’re the sort of candidate who’ll grow and develop alongside your employer.”

How Will I Be Trained?

“By asking this question, you’re showing an interest in the nitty-gritty of the initial stages of your employment and your development in the future,” Buffett said. “Good employers recognize that training isn’t just about onboarding and should include constant development. By wanting to learn more about training, you’re proving you understand the importance of learning the basics and developing your skills as you progress.”

What Are the Most Important Things You’d Like Me To Accomplish in the First 30, 60 and 90 Days on the Job?

“This question helps prove you’re serious about wanting to succeed,” Buffett said. “You’re showing you want to understand how to perform effectively during the crucial onboarding stage of your role and, in turn, establishing how you can become a strong player.”

Where Have Successful Employees in This Position Progressed To?

This question is similar to the one about advancement opportunities, but it’s a bit more specific.

“You’re proving that you’re committed to being a successful employee in this role in particular, alongside the growth mentality,” Buffett said.