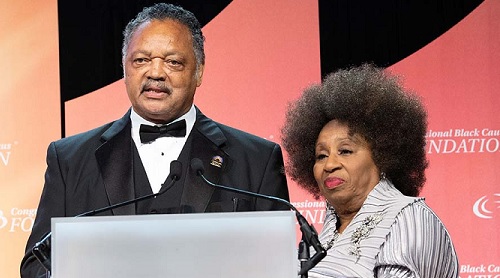 The family of the Rev. Jesse Jackson announced Friday that the civil rights icon has been transferred to a rehabilitation facility and his wife, Jacqueline, was moved to the intensive care unit as they continue treatment for COVID-19.

This comes after the Jacksons were initially admitted to Chicago’s Northwestern Memorial Hospital last Saturday after testing positive for the virus.

ABC 7 in Chicago reports that while Rev. Jackson, 79, has recovered from COVID-19, his family says the symptoms of his Parkinson’s disease have “become more in focus.” He is now at the Shirley Ryan Ability Lab, according to ABC 7, where he will undergo intensive occupational and physical therapy.

Meanwhile, The Rev. Jesse Jackson’s wife Jacqueline, has been moved from intensive care back into a regular room at the Chicago hospital where she’s being treated for COVID-19. Jonathan Jackson, one of the couple’s five children, said in the statement that their 77-year-old mother, Jacqueline, remains at Northwestern Memorial Hospital, where she “continues to receive oxygen.”

She is still breathing on her own and hasn’t been placed on a ventilator.

Their family praised the medical care Jackson and his wife are receiving, and urged everyone who has not yet been vaccinated to do so “immediately.”

“We continue to receive the love that is being poured out to our family from around the world and it is greatly appreciated, as we express our love and concern for the millions of people who have been victimized by the COVID-19 virus and its variants. We know this is a dangerous disease so please remain prayerful for all of those who are suffering as a result,” the family said in their statement.

Rev. Jackson received his first dose of the Pfizer BioNTech COVID-19 vaccine during a January news conference, and has encouraged Black communities to do the same. A Jackson family spokesman told NBC Chicago that Jacqueline Jackson has not been vaccinated. He declined to elaborate further.