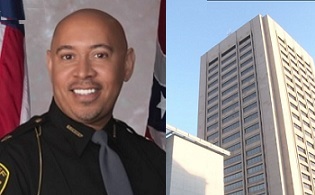 During testimony in the trial of former Cuyahoga County Jail Director Ken Mills, former Sheriff Cliff Pinkney says Mills and County Executive Armond Budish effectively removed his authority over the county jail, giving Mills authority over staffing, budget and procedures as conditions at the jail deteriorated between 2017 and 2019.

Pinkney was promoted from chief deputy to sheriff in 2015, taking over for Frank Bova, who Budish promoted to Chief Community Safety and Protection Officer.

Under state law, sheriffs are responsible for conditions inside county jails. But Pinkney testified that Mills once changed the locks at the entrance to the jail without telling him.

“One day I was walking through the jail, Mr. Mills asked me, ‘How did you get in here?’” Pinkney testified. “I told him, ‘I have a key.’ The next time I went to the jail, my key didn’t work.”

Mills explained to Pinkney that he changed the locks because too many people who no longer worked there had keys. Pinkney asked for a new key and received one from Mills.

At issue in the trial is whether Mills used his authority to prevent the county from hiring enough nurses and other staff to provide adequate conditions inside the jail.

During testimony earlier in the day, FBI Special Agent Daniel Eyer testified on the jail’s increased reliance on redzoning during Mills’ tenure. During these periods, prisoners in individual units are kept in their cells for an extended time when the jail is understaffed.

Eyer arrived at those numbers during a 2018 civil rights investigation into conditions at the jail. Charges were never filed. Mills’ defense argued that most of the redzoning was in response to corrections officers missing work.

Pinkney testified Thursday he had alerted Budish and other high-ranking officials about problems with staffing at the jail, including in the medical department. He says those concerns were never acted on.

“I had all of the responsibility but none of the authority. The executive was the decisionmaker,” Pinkney said. “I tried to express to the county executive and everyone in my immediate chain my issues and what I thought was best and that was the best I could do.”

In 2017, according to Pinkney, Mills was under consideration for promotion to Bova’s position after Bova left for a job at MetroHealth. Pinkney said he told Budish he would fire Mills if he had the authority.

“What I knew was he was going behind my back,” Pinkney said. “He had to be told several times to share information with me.”

Mills is charged with five counts related to overcrowding, insufficient medical care and several deaths at the jail.

The trial continues Friday with cross-examination of Pinkney.