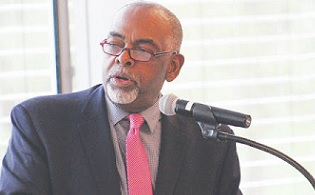 The Rev. Stanley Miller is being remembered as a civic giant, a pillar of the community, a freedom fighter and the greatest mentor a person could have.

Miller died Thursday morning after a brief battle with esophageal cancer. Tributes have been pouring in on social media for Miller, whose work in so many different arenas impacted so many lives.

Miller was perhaps best known for the six years he led the Cleveland chapter of the NAACP as its executive director. But he may be best remembered as a champion of children.

“Education is the gateway,” he said when he stepped down from the NAACP to lead a charter school in East Cleveland. He would later chair East Cleveland’s Academic Distress Commission, helping to turn around a school system in crisis.  And long before that, when his children were attending school in Warrensville Heights, Miller served on the school board there and was president of the board. He also served as interim chief external affairs officer for the Cleveland Metropolitan School District.

Reverend Stanley Miller most recently served as a pastor for the Wesley United Methodist Church in Lorain. [NAACP Cleveland]

A good education was a child’s right, Miller believed. And making sure they could access that right meant providing them mentors, extracurricular activities, teams to join and vocational training.  Danielle Sydnor, president of the NAACP, said when she worked with Miller, the work often moved from the civil rights concerns of the NAACP to the education arena.

She said Miller believed firmly that given the right opportunity and exposure, “a child could go on to do all the things we imagine should be possible”

“I think he wanted our kids to believe that their future is bright and that regardless of the zip code or socio-economic condition or race or creed that they’re from, that they have an opportunity to to be amazing and that they have a right to dream and to aspire to do things that will not just benefit them, but that will help to uplift their whole community,” she said.

Miller was a graduate of Glenville High School and Kent State University.

Jolly, the Warrensville Heights Schools superintendent, was a student in the district when he first got to know Miller, who served on the school board at the time and would continue in that role for more than decade.

Miller’s children attended Warrensville Heights schools and played on sports teams with Jolly. He remembers Miller’s boundless energy as a member of the board, or serving as “the coach, or in some cases the commissioner, or in some cases, other kid’s dads.”

Jolly called Miller a “child advocate first, whose heart is with the children” and whose  service has always been about bettering the lives of those kids. Miller, he said, was a mentor to countless children, including Jolly.

Yvonka Hall, the executive director of the Northeast Ohio Black Health Coalition, which runs a conference that focuses on disparities facing the Black community.  She said the conference wouldn’t exist if it hadn’t been for Miller’s help. She recalls telling him about the idea seven years ago, and telling him she had no funding to make her idea a reality.

“He said, ‘That’s OK because I’m going to convince people to give you money for this.’ And that’s what he did,” Hall said. “He went to the foundations that were not giving me money and said, you need to give money for this. I think that this is going to be monumental for Cleveland.”

“God has a way of putting people on a path to help make our journey a little smoother. And for me, in hindsight, it’s him,” Hall said.  “I think there are people who are connectors and they have a time here in order for them to connect folks to the things they need in order to help change people’s lives. And I think that that was him. Before all of that work, Miller spent 31 years at Ameritech, retiring in 1999 as vice president of external affairs.

In recent years, he served as a pastor of United Methodist churches in Lorain County and then continued to serve the community as manager of local government relations for the MetroHealth System.  One of his victories was ensuring that communities such as East Cleveland and Maple Heights had access to the COVID-19 vaccine.

Michael Tobin, vice president of communications, government relations and community affairs for MetroHealth, said when the hospital system got the vaccines, Miller was, “Johnny on the spot with anything we needed.” If there was a permit from the fire department needed for a vaccine clinic, Miller got in his car and went to city hall and talked to the fire chief, Tobin said.

“Stan pushed for us to do vaccination clinics at Shaw High in East Cleveland. There was a young girl who showed up. She was probably sixteen years old, old enough to get the vaccine, but she needed parental consent. And Stan said, ‘I need you to go home and get your mom and bring her.’ And she left, and we’re worried she was never going to come back,” Tobin said. “And of course, an hour later, she shows up with her mom. I remember Stan dabbing his eyes because he just felt, you know, he understood the needs in the community.”

Miller is survived by his wife Ronnie, sons Stanley Jr. and Steven, and seven grandchildren.

Services for Stanley Miller Sr. will be Friday, September 17, 2021 at Church of the Saviour, 2537 Lee Road, Cleveland Heights [44118]. His body will be at Calhoun Funeral Home Bedford.