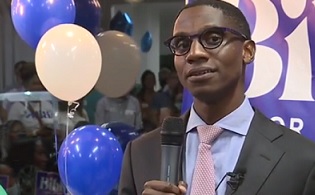 Buoyed by landslide wins in Downtown and the Near West Side, Bibb captured 27 percent of the citywide vote, according to unofficial results from the Cuyahoga County Board of Elections. Kelley achieved a similarly dominant victory in his home base of Ward 13, the Old Brooklyn neighborhood, winning 19 percent of the overall primary electorate.

Kucinich, who served as mayor from 1977 to 1979, finished third with about 17 percent of the vote. In a brief concession speech, Kucinich thanked his supporters and congratulated Bibb.

Zack Reed, Basheer Jones and Sandra Williams each garnered around 11 to 12 percent of the vote. Ross DiBello trailed with 2 percent of votes.

“I believe that we cannot afford more of the same,” Bibb said to supporters gathered at ThirdSpace Action Lab Tuesday night. “I believe that now, not tomorrow, not yesterday, is the time for bold leadership.”

He urged the group to continue that work and push through the November election to bring change to Cleveland. That promise of change, according to supporters at the event, is what drew them to the campaign in the first place.

“I’m excited to see some young energy come into the city and lead,” said Cleveland resident Rachel Gardenhire. “I really feel he can bring positive changes the city needs to keep growing.”

Supporters and campaign staff celebrated Kelley’s advance to the November election at the Harp on Cleveland’s West Side.

“We all know there were people who said there was no way we were going to get through the primary,” Kelley told supporters. “But we did. And we did because people believe in the message that we crafted together.”

Kelley campaigned on experience and plans to expand broadband internet access to neglected parts of the city and a citywide jobs program.

“We’re not going back to a pre-COVID Cleveland,” Kelley said. “We’re going to a Cleveland that we all believe in, where we all prosper, where we all move forward.”

Candidates not advancing to the general election thanked supporters in their concession speeches.

Ward 7 Councilman Basheer Jones received about 12 percent of the vote. He conceded at his campaign headquarters in MidTown with tears in his eyes, thanking his family for their support and his campaign volunteers for their hard work.

“I am not sad because of the race. I am so emotional because of what I personally saw with each individual that was part of this race,” Jones said. “The tears that come to my eyes is not because of this (election), it’s because the beauty of this race, to see so many of my young people be transformed.”

One of his supporters, Samari from Cleveland’s East Side, said she supports Jones because he’s a role model for her seven kids.

“I have five sons to raise in the city of Cleveland, and Basheer has stood as an excellent role model for young Black men in the community, has mentored them and has just showed them what true leadership is about,” she said. “He’s been one of those people that actually lead by example.”

State Sen. Sandra Williams, the lone woman in the race of seven, dueled much of the night with Basheer Jones for 5th place in the primary. While she will not advance to the general election, she said she will spend the rest of her time in the state legislature ensuring that the top two mayoral candidates keep issues of economic development, public safety and education top of mind, because those are the issues important to voters.

“In my position as Senator, I will not be giving up. I will be holding the next mayor of the city of Cleveland accountable for those issues. Because if we don’t make change, we will continue to slide to the bottom of every category. And I don’t want to see that as a lifetime resident of Cleveland,” Williams said.

At the end of her watch party at Academy Tavern in Larchmere, Williams thanked the crowd, which included her campaign staffers, her supporters and her family- a loyal army of siblings, nieces and nephews who canvassed on behalf of their “role model” throughout the primary.

Williams also had strong words to women fighting “for their place in society.”  She argued that “nobody would be able to say that she didn’t have the most experience” of the candidates, or that she had never “delivered” for Cleveland or Cuyahoga County.

“When I got in this race for Cleveland mayor, the first call or one of the first calls we made and I’m never giving names…was ‘How much money can we pay you to go away? How much money would it take for you to get out of this race? What job do you want?’ There was no price too high for us to get you out of this race,” Williams said. “They did not want me in this race. And so what I’m trying to say to you all is this, women have to take our place in society and say it doesn’t matter how long it takes us to do it.”

“We fought a valiant fight. It’s not for us to make up any excuses. We know that we did a very good job on this campaign trail,” Reed said. “We did well. We just didn’t do well enough.”

Four of the seven candidates, including Reed, are Black. Reed supporter Lisa Bradfield said African American voters were too split on the choices, especially since there were four Black candidates.

“I think there were too many people in the race,” Bradfield said. “I think if there weren’t so many people, it would have been a little bit better for Zack.”

Bradfield, a Ward 13 resident, said she will now support Kelley. She hopes Reed will run for an office at the state level.

Voter turnout in Ward 2 this year dropped by more than a couple hundred votes from 2017 when Reed was the sitting councilman.

He didn’t make that as an excuse for the loss, but recognizes that he didn’t have the Ward 2 “machine to move forward.”

“Let me be clear here,” Reed said. “We ran a good race. It was an enthusiastic race. We raised a lot of money. We got a lot of votes. We just didn’t get more votes than the other guy.”

Reed said he is unsure what career move he will make next.