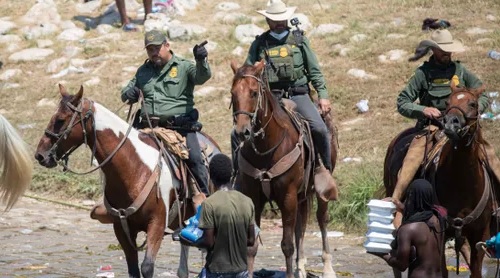 A white man on horseback wearing a cowboy hat lunges to grab a Black man who fights to get away. It looks like the cowboy has a whip. It was a frozen moment of terror or triumph, depending on where you land. It’s American history, really. Cowboys have always been good. Black people have always been on the other end of the whip. A white man is capturing a Black man and it’s more than just a moment caught in the year of our lord, Michael K. Williams.

The optics of it are obvious. The image is both depressing and captivating; enthralling and maddening; illuminating and apparent. America is going to America because America just can’t stop being America.

Last Tuesday, the United States government was set to send back thousands of Haitian migrants looking for a better life and opportunity because the Statue of Liberty has always been a monument of white flight.

More than 6,000 Haitians and other migrants had been removed from an encampment at Del Rio, Texas, U.S. officials said Monday as they defended a strong response that included immediately expelling migrants to their impoverished Caribbean country and faced criticism for using horse patrols to stop them from entering the town.

That was enough for some Haitian migrants to return to Mexico, while others struggled to decide on which side of the border to take their chances.

Department of Homeland Security Secretary Alejandro Mayorkas told AP that it was a “challenging and heartbreaking situation,” but he issued a stark warning: “If you come to the United States illegally, you will be returned. Your journey will not succeed, and you will be endangering your life and your family’s life.”

The AP notes that Mexico’s National Human Rights Commission allowed those interested in seeking asylum in Mexico to sign up. So far, they have more than 19,000 signatures.

Meanwhile, buses were seen arriving on Monday and the Mexican National Guard had rounded up some 15 to 20 migrants. The plan, it seems, was to take migrants to nearby towns so that they could be flown back to Haiti.

There have been promises by officials to look into agents riding horseback carrying what appears to be whips to capture migrants (The Washington Post notes that the Border Patrol chief claims agents were holding long horse reins). The Department of Homeland Security even called the image “extremely troubling” and promised a full investigation that would “define the appropriate disciplinary actions to be taken,” AP reports.

Because America wants the migrants to be gathered and expelled from the country—just not in a way that harkens back to America’s greatest sin. And truthfully, no one knows why so many Haitian migrants have sought to come to America at this time. Some believe that it was the changing of the guards as the Biden administration reversed former Trump’s tyrannical immigration laws. “Some left to find work. Others to escape violence or racial discrimination in other countries. But many believe ‘there is nothing to go back to,’” the New York Times reports.

Some 600 Homeland Security employees, including from the Coast Guard, are currently on the border for what will be the largest expulsion of migrants from the U.S. in decades. And the optics are obvious.

We are in a pandemic. We can’t take on any more citizens. We’re at capacity.

“It’s not right,” Haitian migrant Jean Philipe Samus, told AP. “The Americans are grabbing Haitians and deporting everyone to Haiti. Haiti has no president, no jobs, there is nothing. In the earthquake a lot of people died. It’s not right over there, I’m going back to Mexico.”

And that photo tells us all we need to know about America. So does the Constitution and the Declaration of Independence and the poem etched into the base of the Statue of Liberty—you know the one that reads: “Give me your tired, your poor, Your huddled masses yearning to breathe free…”

Unless…well, you already know what I’m getting at.