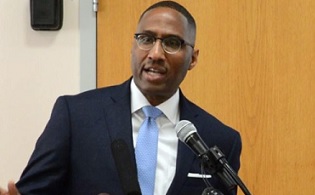 Reed and Jones won 12 and 11.8 percent of the Sept. 14 primary vote, respectively. They maintain political bases in parts of the city’s East Side that will be crucial as Kelley and Bibb work to expand their support before November.

In an interview with Ideastream Public Media, Reed said he believed a Bibb administration would pay attention to the needs of the city’s southeast side – a part of town that Reed used to represent on Cleveland City Council.

“Justin has the plan, the policies and procedure to deal with the problems that existed yesterday, that exist today and to erase those problems in tomorrow,” Reed said. “And Justin promised me that when he’s mayor of the city of Cleveland he’s going to ensure that the people here on the southeast side of the city of Cleveland get the same resources and get the same opportunities that other neighborhoods have gotten across the city.”

Reed said he would canvass, make phone calls and raise money in order to marshal his supporters to the polls for Bibb. The southeast side of the city represents a significant part of the East Side electorate, Bibb said.

The two men held an event at Reed’s campaign headquarters in the Mount Pleasant neighborhood. About six miles away, in St. Clair-Superior, Jones announced his support of Kelley.

Jones told a crowd of supporters that the contest for mayor should not be about the race of the candidates. Kelley is white and Bibb is Black.

“I don’t just go with somebody because they look like me, that’s foolishness,” Jones said. “I go with somebody who has the results, who has the reputation, who believes in the renaissance and who understands that this community needs resources. And despite what people may believe about [Council] President Kelley, he’s a man of honor. He’s a person that stands on his word.”

In an early July mayoral forum, Jones suggested that he and Bibb were on parallel paths, saying they both “have the same mission to make this city better, even if we’re riding in different cars.”

But on Wednesday, without naming Bibb, Jones referred to him as “someone who has come from nowhere, and we have no idea who they are or where they came from.”

Jones said he and Kelley disagreed on issues in the past, but that they could still work together. Kelley said he and Jones collaborated on council to support development projects in Jones’ Ward 7, which includes the Hough neighborhood.

The general election will be held Nov. 2, but early voting begins Oct. 5.