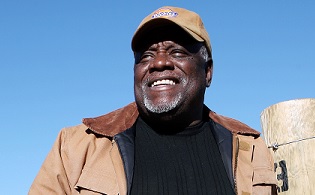 In 2004, Frazier created Neighborhood Solutions, Inc., a non-profit organization dedicated to helping formerly incarcerated people or at-risk individuals get into the work force.

Chateau Hough, perhaps the most noteworthy project created through Neighborhood Solutions and established in 2010, is a vineyard and winery in the heart of Cleveland’s Hough neighborhood in Cleveland’s Ward 7. It features rows of grape vines and a biocellar.

“We want to create a triple net bottom line. We want to reuse land, create something green, but most of all, we want to stabilize young people coming out of incarceration. So, it’s really a re-entry project disguised as a vineyard,” Frazier said in a 2016 interview.

While his Hough neighborhood bears the scars of poverty, blight and crime, Frazier was always fiercely proud, leading visitors on tours of well-kept and rehabilitated homes, including the one he shared with his wife, Brenda, and extolling the area’s potential. Frazier proudly touted the fact that Chateau Hough can be seen with ease as the urban farm doesn’t have fences.

“We will never fence ourselves off from our neighbors. We won’t have to. In every community, there’s 13, 14, 15-year-old boys that act out. What we do – we hired them,” Frazier said in a 2015 social enterprise contest pitch for the business.

It was his own checkered past that motivated him to dedicate his life as an advocate for reform and re-entry. Frazier went to federal prison five different times for counterfeiting and fraud.

He was never shy about sharing stories of his criminal past, which included spending millions of dollars using other people’s credit cards. He commonly referred to himself in the past tense as a “career counterfeiter” and prison as an “occupational hazard.” He wrote a book, “From Behind the Wall,” about his past and his thoughts about America’s prison system while serving his final prison sentence.

“He made lemonade out of lemon juice. He turned his life around. He used the skills that he had used for bad for good,” Connally said.

Frazier was dedicated to his community and cared deeply about turning Hough into a sought-after neighborhood like it had been decades ago.

“All I’m hearing about is, ‘Tear down. Tear down.’ I’m not hearing anything about rebuild,” Frazier said about Hough’s abandoned homes in 2013.

In addition to his re-entry programs, Frazier worked as a journalist for several publications, including local Black publications, The Call & Post and City News.

He and wrote columns for the Cool Cleveland email newsletter and website, where he pulled no punches about politics, race and anything else that motivated him to write. He regularly hosted a show on WTAM radio and was a frequent caller to talk shows, including the “Sound of Ideas” on 90.3 WCPN.

“He was concerned about the city. He grew up here. He was away for a while and then he came back and he wanted to make it a better place,” Connally said.

Chateau Hough was featured in Oprah Winfrey’s “O, The Oprah Magazine” in 2012. Frazier proudly talked about the recognition from Winfrey during a 2015 business competition pitch, but joked that, “Now she won’t stop calling me.”

Frazier explained in the magazine that he decided to grow grapes and make wine grapes because they are more profitable than most other fruits and vegetables. He estimated that each vine could yield ten $10 bottles of wine.

“You can’t get that off of bell peppers,” Frazier said.

In March, The New York Times featured Frazier and Chateau Hough in a Style Magazine piece on growers, bakers and beekeepers.

Frazier was known as someone who treated the people with him the way he treated the crops: He got the best of out of them.