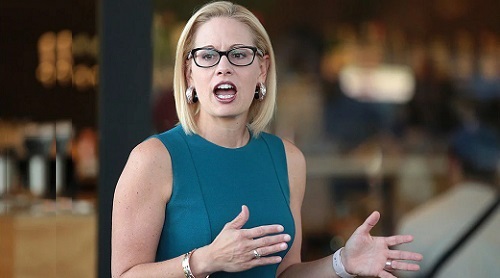 She’s raked in cash from the Chamber of Commerce, Business Roundtable, and others trying to gut the reconciliation bill. Connect the dots.

Of the set of lawmakers working to slow down or completely stop progress on the Biden administration’s $3.5 trillion reconciliation bill, almost no one is more famous—or infamous—than Senator Kyrsten Sinema. The Arizona Democrat has styled herself as a moderate and underscored that position by vowing to oppose the reconciliation bill at its current $3.5 trillion price tag.

That’s won her one-on-one meetings with President Biden. It’s won her an endless stream of press coverage. And it’s won her something else: support from major business entities working to gut parts of the reconciliation package or the entire bill overall.

Accountable.US, the liberal nonprofit group, has compiled a report of donations to Sinema from organizations like the U.S. Chamber of Commerce and PhRMA, groups actively working to trip up the reconciliation package, a key pillar of Biden’s domestic policy agenda.

For fearless reporting in defense of democracy, subscribe now!Subscribe

The report tallies that Sinema has received “at least $923,065 from the industry groups leading this charge against the Build Back Better budget or from the individual corporations these groups represent.” The report centers on five interest groups: the U.S. Chamber of Commerce, the Business Roundtable, the RATE Coalition, the National Association of Manufacturers, and PhRMA.

“Super-rich corporations have given Senator Sinema nearly a million reasons to vote against making them pay their fair share in taxes,” Kyle Herrig, president of Accountable.US, said in a statement. “Make no mistake, if she sides with her wealthy donors and kills popular investments to jump-start the economy, everyday families—including across Arizona—will pay the price.”

The donations went through three committees for Sinema: Kyrsten Sinema for Congress, Sinema for Arizona (her Senate campaign), and Getting Stuff Done Pac (her leadership PAC). Some of the donations in the report also go as far back as 2012, long before Biden was elected president and began pushing his Build Back Better Agenda. It’s also before Sinema completed her transformation from uberliberal Arizona Green Party activist to the John McCain–worshipping outspoken moderate who’s more than happy to buck her party’s agenda.

The report’s very existence is an indicator of how big a threat backers of a robust reconciliation package consider Sinema to be. To them she is more pivotal and potentially more dangerous than any Republican.

Sinema’s current objections to the package, according to The Washington Post, center on whittling down “some of the aid more narrowly based on income and economic status” in proposals, like new funding for community colleges and pre-kindergarten. It’s a move liberals have become familiar with, to their chagrin. It’s also something that gives Sinema tremendous leverage in a Senate split 50–50, where Democrats need every member of their caucus to vote in lockstep to pass any legislation at all.

For fearless reporting in defense of democracy, subscribe now!Subscribe

The frustrating thing for her colleagues is that many of Sinema’s specific objections to the reconciliation package are a mystery to the public—and an ongoing source of political intrigue in Washington policy circles. Her position on corporate tax increases, for example—a vital part of the package, as they would constitute the main revenue source for the bill—is unclear. But in May, Senate Minority Leader Mitch McConnell reassured his Republican colleagues that Sinema is one of the key reasons they should hope there would not be any significant tax increases in the reconciliation package.

“I don’t think she has one,” a Democratic lobbyist who often deals with the Senate said, when asked about what her position might be on taxes that could hit these interest groups. “I would say she’s in the mid-20s, maybe as high as 28 [percent]. Depends on other issues.”

The groups highlighted by Accountable.US are certainly trying to persuade Sinema not to back the reconciliation package. In total, the Chamber of Commerce and its leadership boards have given her over $448,000. The organization’s objections include the package’s high price tag and possible high tax increases.

The Business Roundtable, the report says, gave the Arizona senator $187,000. The Roundtable’s president and CEO, Joshua Bolten, said his group’s major concern is “potential tax increases on U.S. job creators that would counteract the benefits of infrastructure investment.” The group has also publicly praised Sinema’s approach to the infrastructure bill the Biden administration has coupled to the reconciliation package.

The RATE Coalition’s members gave her $210,000. The coalition, which aims to keep corporate taxes down, represents FedEX, Lockheed Martin, Capitol One, and Disney. Former Senator Blanche Lincoln, the coalition’s chief adviser, said, “Any increase in the rate would position our country even further behind global competitors like China.”

The anti-tax pattern extends to all the groups. The National Association of Manufacturers similarly gave Sinema $32,500. Aric Newhouse, the senior vice president for policy for the group, has also warned that the potential tax provisions in the package would hit “manufacturing families” hard, and he warned that “jobs will be lost.”

And PhRMA has poured $15 million into lobbying against the reconciliation package in 2021. It gave Sinema $6,000, and its major members gave $23,000. Its objections are on Democrats’ drug-pricing proposals, which would be a potential source of revenue for the package. Sinema herself has privately indicated to the White House she opposes the drug-pricing reforms in the package. She has signaled opposition to a part of the package that lets Medicare negotiate pricing for prescription drugs.

Sinema’s office did not respond to a request for comment.

Still, the donations and the report itself underscore the battle lines Democrats are forced to pay attention to as they try and move the reconciliation bill through Congress. No lawmaker, realistically, expects the budget proposals not to pass through Congress. But liberal Democrats do worry that the sausage-making process will dramatically weaken the provisions in there, to a point where it tries to do way too much with too little money.

The Accountable.US report is also yet another sign of the ongoing tensions between Sinema and the rest of her party—so much so that a watchdog nonprofit wants to take aim at her and the more traditional corporate entities organizations like that cover.

“Opinions are subjective, so if she says her opinion aligns with theirs, the public has no way of gauging whether or not a politician’s opinions are the same as they would have been if they had not gotten financial support from interested industry players,” said Walter Shaub, a former director of the U.S. Office of Government Ethics and a senior ethics fellow at the Project on Government Oversight. “If we had a better campaign finance system that didn’t allow corporations to purchase members of Congress, then we’d be able to trust what these members say are their opinions.”

There’s no way to prove definitively how much influence these donations have had on Sinema, if any at all. But the donations, along with the opinion shared by Sinema and these organizations that the reconciliation bill is too big, are a clear indicator of where their interests align. And it’s worth keeping an eye on what she has to say about corporate tax rates.