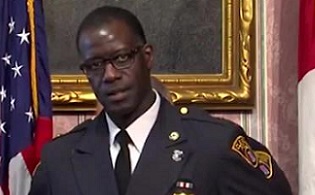 Mayor-elect Justin Bibb had vowed to fire Police Chief Calvin Williams once he was in office.

Cleveland Police Chief Calvin Williams announced he would resign his post in early January during an awards ceremony on Thursday.

The embattled Williams was frequently the target of politicians who wanted sweeping changes brought to the Cleveland Police Department. Mayor-elect Justin Bibb was one of three candidates who vowed to fire Williams if they were elected, News 5 reported.

Williams joined Cleveland police in 1986 and became chief in 2014, Fox 8 reported. He often faced pressure for the city’s violent crime rate, its police use-of-force policies, the discipline of officers, and more.

This actually isn’t the first time Williams has retired. He first retired in 2018 but was hired back two days later…a move that allowed him to simultaneously collect his pension and a salary from the city, News 5 noted.

When longtime Cleveland Mayor Frank Jackson announced he would not seek another term, Williams indicated he too would soon depart his position in the city.

In a statement, Bibb thanked Williams for his service and said he looked forward to searching for a new leader for the police department.