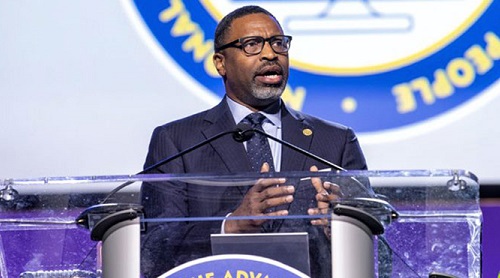 The NAACP is fighting back against racist, transphobic and anti-woman legislation recently passed in Texas by issuing a letter encouraging players in five different professional sports to avoid signing with teams based in the state.

ESPN’s Sarah Barshop reported that “in a two-page letter signed by NAACP President and CEO Derrick Johnson that was sent to the MLB, NBA, NFL, NHL and WNBA players’ associations, the organization pointed to recent laws on abortions, voting rights and mask mandates during the coronavirus pandemic as reasons to avoid joining teams in Texas.”

The letter reads, in part: “If you are considering signing in Texas, I ask you to ensure that owners are upholding their responsibility of protecting you, the athlete and your family. I ask you to use your influence to help protect the constitutional rights of each individual at risk.”

As we have covered extensively over the course of the year, Texas Gov. Greg Abbott and the state legislatures have passed or attempted to pass a number of highly problematic bills in the state, including banning abortions after six weeks of pregnancy, restricting voting rights, attacking transgender teens, censoring books and dramatically limiting what educators can teach in schools, and even downplaying the importance of COVID-19 vaccines.

The NAACP’s letter continues: “Over the past few months, legislators in Texas have passed archaic policies, disguised as laws, that directly violate privacy rights and a woman’s freedom to choose, restrict access to free and fair elections for Black and brown voters, and increase the risk of contracting coronavirus.”

According to Barshop, “the five leagues mentioned by the NAACP in the letter include nine Texas teams: the Houston Astros and Texas Rangers in MLB, the Houston Rockets, Dallas Mavericks and San Antonio Spurs in the NBA, the Houston Texans and Dallas Cowboys in the NFL, the Dallas Stars in the NHL, and the Dallas Wings in the WNBA.”