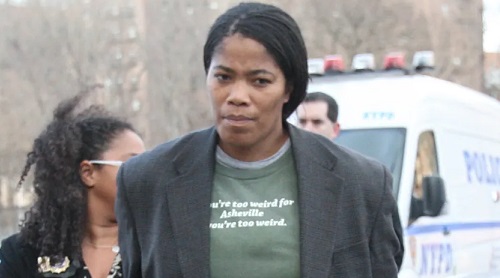 Ms. Shabazz was found in her living room by her daughter on Monday. The police do not suspect foul play.

Malikah Shabazz, one of the youngest daughters of Malcolm X and his wife Betty Shabazz, was found dead at home in Brooklyn on Monday, the police said.

The death of Ms. Shabazz, 56, did not appear to be suspicious, said a spokeswoman for the city medical examiner, who will determine the cause of death. A high-ranking police official said accidental food poisoning may have played a role.

Ms. Shabazz was found dead four days after a judge exonerated two men who were convicted in 1966 of assassinating Malcolm X the year before.

She was found unresponsive on her living room floor by her 23-year-old daughter, who lives with her in the apartment in the Midwood section of Brooklyn, the police said.

Mayor Bill de Blasio said at a news conference on Tuesday that there was no indication that Ms. Shabazz’s death was a crime or the result of foul play. A spokeswoman for the city medical examiner said the office was conducting tests to determine the cause of death.

The death of Ms. Shabazz was a “horrible” turn of events for the family of Malcolm X, who was one of the most important leaders of the 20th century, Mr. de Blasio said.

And it only added to the renewed anguish over his assassination, which was once again in the spotlight last week when the Manhattan district attorney admitted that major flaws in the case had led to two wrongful convictions.

“This family has been through hell over and over again, and there’s some horrible injustice to someone who ultimately did so much good for the world,” Mr. de Blasio said.

Ms. Shabazz and her twin sister, Malaak, were born in 1965 after their father was assassinated. Tributes poured out online as news spread of her death.

The Rev. Bernice A. King, the youngest child of the Dr. Martin Luther King, Jr. and Coretta Scott King, said she was “deeply saddened” by Malikah’s death. “Be at peace, Malikah,” she wrote in a message on Twitter.

Ms. Shabazz’s death was the latest in a series of tragedies to befall the family, whose matriarch, Betty Shabazz, died from injuries sustained in a fire at her home in Mount Vernon in 1997. She was 61.

Her 12-year-old grandson, Malcolm Shabazz, pleaded guilty to charges that he set the fire and served five years in juvenile detention. In 2013, Mr. Shabazz, then 28, was beaten and killed in Mexico during a dispute over a bar tab while in the country to advocate for construction workers’ rights.

Malikah Shabazz left New York in 1999 and moved to North Carolina. In recent years, she was living in Maryland, and it is unclear when she returned to the city.

She had a complicated relationship with her sisters, with whom she fought for more than a decade over her mother’s estate.

In 2011, she pleaded guilty to running up credit-card debt in the name of a 70-year-old widow whose husband had been one of Malcolm X’s bodyguards. She was sentenced to five years probation.

Lori Anne Douglass, who was appointed to represent Ms. Shabazz in the litigation over her mother’s estate, remembered her as smart and full of life.