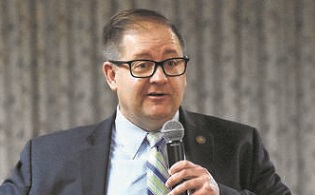 Members of the Ohio Republican Party are suing the leader of their party and accusing him of being responsible for $3 million in “missing funds.”

They were all also part of different ORP committees on topics such as fiscal review, audits, permanent rules and revisions, endorsement policy and county chairs.

Plaintiffs said they became aware of “potential financial improprieties, potential inaccurate financial reporting, the lack of an official audit … over more than a decade and unauthorized support of unendorsed candidates,” according to court documents.

“The millions of Republicans across our state deserve accountability and we are demanding it on their behalf,” said Rosenberger in a statement. “The Ohio Republican Party needs to be saved from within.”

When the individuals voiced their concerns in October 2021, they say Paduchik removed them from their committee positions, in violation of ORP bylaws.

“Per the bylaws, Paduchik should not have reorganized the membership in (State Central Committee) or other committees until after the 2022 primary election and after the new (committee) members elected in that primary are installed,” the lawsuit states.

The OPR members say a commissioned compliance report in 2017 found that the ORP books have not been audited for “at least 12 years,” and requests made by the plaintiffs in the case to examine the books were denied by Johnson.

Citing Ohio Revised Code, the lawsuit said Paduchik had a “duty to perform the duties of a director ‘in good faith, in a manner the director reasonably believes to be in or not opposed to the best interests of the corporation, and with the care that an ordinarily prudent person in a like position would use under similar circumstances.'”

In a letter to fellow Republicans obtained by Cleveland.com, Paduchik called the accusations “crazy,” singling out Bainbridge, who he said was attempting to “damage” the state central committee.