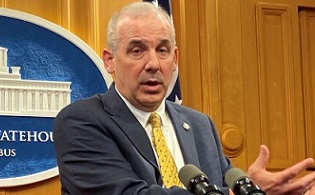 Lawmakers are finishing up a bill to spend $4 billion in federal American Rescue Plan money on schools, child care, mental health programs and efforts to fight COVID. The Ohio Senate changed the bill, which sends it back to the House for approval before it goes to Gov. Mike DeWine for his signature.

And the bill revisits an area that some child care advocates had thought was settled.

The bill says for the next year as the pandemic continues, those getting publicly funded child care can use any provider, not just those rated by the state’s Step Up to Quality star rating system.

Senate President Matt Huffman (R-Lima) said there are not enough spaces in places that take public funding, and the rating system is too complex and expensive for those that don’t have a star.

“They can’t comply with the bureaucratic paperwork and all of the other requirements and the purchases of equipment, etc. in order to get that,” Huffman said “So what do they do? They’re not going to go out and hire somebody to do it. They’re just going to stop babysitting.”

Huffman said that means people who need child care may not be able to get back to work.

Huffman had proposed eliminating Step Up to Quality in the new state budget, but settled requiring providers to have one star and the creation of a task force to study it.

Senate Democrats supported the bill with the change to Step Up to Quality, though some said they did so cautiously, including Sen. Nickie Antonio (D-Lakewood).

“When quality measures are in place, the outcomes for the children that participate in those programs are increased, and their ability to not only succeed in school but even later to succeed as they move on their path goes up,” Antonio said on the Senate floor.

Antonio noted the task force that is set to study the rating system had its first meeting the same day lawmakers voted on the bill to suspend the Step Up to Quality requirement for those receiving publicly funded child care.