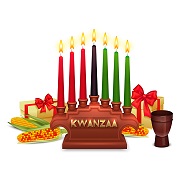 Every year Kwanzaa comes around, you swear you’re going to learn a thing or two about it.

Read these quick cliffnotes and you’ll be the cool kid at the dinner party this year with actual facts about Kwanzaa. When your white co-workers inevitably try to seem “woke” and ask you how your Kwanzaa was, you can hit Susan with a “Well, actually…”

Kind of like your bougie cousin, Kwanzaa is spiritual/cultural, but not religious. It does start the day after Christmas though.

Kwanzaa lasts from December 26th to January 1st. The purpose of Kwanzaa is to celebrate and honor the African roots of African Americans and to strengthen family and communal bonds. Many families celebrate Christmas, Kwanzaa, and New Year’s Day.

Each Day Highlights a Different Principle

Kwanzaa is seven days long and each day, rituals are performed (such as lighting candles in the kinara) to honor a different principle. The principles are: Umoja (Unity), Kujichagulia (Self-Determination), Ujima (Collective Work and Responsibility), Ujamaa (Cooperative Economics), Nia (Purpose), Kuumba (creativity), and Imani (Faith).

There Is Kwanzaa Swag

In addition to the seven principles of Kwanzaa, there are also seven symbols which every Kwanzaa-celebrating family should own. You might notice that in all the stock photos you see of Kwanzaa celebrations, the same objects appear in them. That’s because those objects hold special meaning. The seven symbols are: Mazoa (Crops), Mkeka (Mat), Kinara (Candleholder), Muhindi (Corn), Mishumaa Saba (Seven Candles), Kikombe cha Umoja (Unity Cup), and Zawadi (Gifts). Many people also utilize kente cloth to decorate their Kwanzaa table set-up.

There are Presents Involved and a Feast

Kwanzaa culminates with a feast that is full of rituals meant to reinforce familial bonds. For example, family members are asked to each drink from a shared cup—the Kikombe cha Umoja. This is also the time for gift-giving, but instead of gift-cards and laptops, homemade gifts are encouraged. It is the thought that counts and it’s all about cooperative economics and keeping dollars flowing in the community. Hopefully, your family is craftier than Denise who made an honest effort to make a homemade version of that Gordon Gartrell shirt.

Kwanzaa is Only 51 Years Old

This is part of the reason that some people feel Kwanzaa is not legitimate. Folks feel like it’s a “made up” holiday. But the fact is, every holiday was made up at some point and because this is a non-religious holiday, there is no new God to praise or anything like that. It’s literally a week of family bonding.

The Name Kwanzaa is Swahili

The name Kwanzaa is derived from the Swahili first fruit celebration called matunda ya kwanza. The traditional greeting during Kwanzaa is also Swahili. When someone says “Habari gani?” or “What’s the news?”, the answer is whatever the highlighted principle is that day.

However, the rituals and objects involved with Kwanzaa celebrations are a mix of different African cultures. This is another reason why some people criticize Kwanzaa because the celebration of African roots is rather broad. It is an entire continent after all.

Maulana Karenga created Kwanzaa in 1966 on the heels of the Watts Riots. Having founded a community organization called US, Karenga (an activist and UCLA graduate) was looking for ways to encourage Black people to celebrate themselves and their roots.

In 1971, Karenga was sentenced to one to 10 years in prison for assault and false imprisonment of two women from the US organization. He served four years in prison and has steadfastly denied the allegations, referring to himself as a political prisoner. Because of that conviction, some people take issue with celebrating Kwanzaa at all. Today, Karenga is an Africana studies professor.