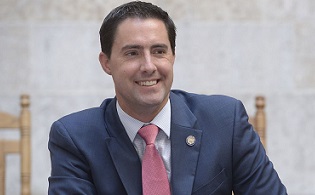 A proposal to legalize marijuana in Ohio is poised to head to the state Legislature after proponents got the backing of more than 200,000 voters.

The Coalition to Regulate Marijuana Like Alcohol submitted 206,943 signatures to Secretary of State Frank LaRose for a bill that would allow adults to buy and possess marijuana. The group drafted its measure earlier this year and began collecting the required 132,887 signatures in August.

The process differs from the 2015 legalization effort, when voters rejected a constitutional amendment pushed by ResponsibleOhio that would have paved the way for adult marijuana use.

“Eighteen states have already legalized cannabis for adult use, including our neighbor to the north,” campaign spokesman Tom Haren said. “Ohio is behind the curve on this issue and can’t afford continued inaction.”

Once the signatures are verified, lawmakers will have four months to act on the legislation. If they don’t pass the bill or pass an amended version, supporters can collect another 132,887 valid signatures to put the measure on the ballot for the next general election.

The proposed law would allow Ohioans age 21 and older to buy and possess 2.5 ounces of cannabis and 15 grams of concentrates. They could also grow up to six plants individually and no more than 12 in a household with multiple adults. Products would be taxed 10%, with revenue going toward administrative costs, addiction treatment programs, municipalities with dispensaries and a social equity and jobs program.

Ohio’s licensed medical marijuana businesses would be grandfathered in to the recreational market. The bill also creates cultivation and dispensary licenses for applicants who are economically and socially disadvantaged, including those with marijuana-related offenses on their record. The legalization effort will go before lawmakers as they consider whether to expand

The measure will now be considered by the House, where further changes are expected.

Haley BeMiller is a reporter for the USA TODAY Network Ohio Bureau, which serves the Columbus Dispatch, Cincinnati Enquirer, Akron Beacon Journal and 18 other affiliated news organizations across Ohio.