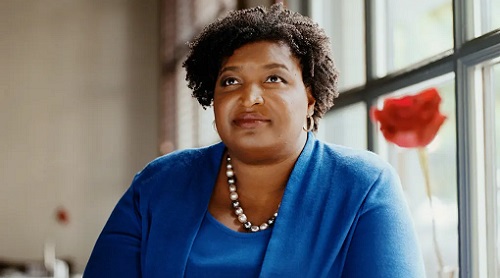 The candidates are seeking a diverse range of governorships, in states known for their progressive politics as well as historically conservative states with a long and complicated history with Black Americans. And experts say a Black woman as governor would change any statehouse dynamic almost immediately.

“I’m of the mindset that Black women can help us overcome the challenges that regular, everyday people are facing,” Deidre DeJear, who is running for the Iowa governorship, told Yahoo News.

Georgia-based Democratic political operative Abigail Collazo echoed the sentiment. Collazo worked on the historic 2018 gubernatorial campaign of Stacey Abrams, who is a candidate again this cycle.

Race notwithstanding, women have consistently had to overcome disproportionate opportunities to succeed in politics throughout American history. Women earned the right to vote only with the passing of the 19th Amendment in 1920. For many Black women, it would take another 45 years and the passing of the Voting Rights Act of 1965.

Today there are just nine female governors — six Democrats and three Republicans — despite women representing a slight majority of the population. The country has yet to elect a woman as president.

Kansas Gov. Laura Kelly, a Democrat, told Politico in September that women who aspire to be governor have to strike the tricky balance of appearing tough enough for the job but not “too aggressive, because that tends to turn people off too.”

“It’s a real balancing act and not an easy one,” Kelly said. “You just don’t have a whole lot of people out there who want to put themselves in that position.”

For Black women aspiring to higher office, data shows that the climb is even steeper. A new report from the Higher Heights Leadership Fund found that Black women make up 7.8 percent of the U.S. population but account for less than 5 percent of elected roles in statewide executive offices, Congress and state legislatures. This is despite Black women’s achievement of a record high in state legislative representation this year, as well as Kamala Harris’s assumption of the vice presidency.

“Even where their numbers have increased, there is still vast opportunity for growth in the number of Black women running and winning at all levels of office,” the report notes. “The 2022 elections offer an immediate occasion for harnessing Black women’s political power both at the ballot box as voters and on the ballot as candidates.”Republican pollster Patrick Ruffini, who’s working on a book about how the GOP can appeal to a multiracial coalition, argued to Yahoo News that the discrepancy is due to the field of candidates running for office — and that the field is diversifying. Last month Virginia made history by electing Republican Winsome Sears, a Black woman, to the lieutenant governor’s office.

“I think we live in a time where neither race nor gender impacts who can get elected,” Ruffini said. “It’s a matter of stepping up and running, and as a result we are seeing record numbers of women and minority candidates winning, in both parties.”

Here are the 5 Black women running for governor in 2022

Danielle Allen, an academic with a long résumé within the nonprofit sector, is one of several Democrats hoping to retake the Massachusetts governorship amid the news that Republican Gov. Charlie Baker is not seeking reelection.

Allen graduated from Princeton, Cambridge and Harvard, and she currently serves as the director of Harvard University’s Edmond J. Safra Center for Ethics. While this is Allen’s first foray into elected office, she thinks her experience gives her an edge over her opponents.

Given Massachusetts’s Democratic lean, much of the action will be in the primary, which includes Sonia Chang-Díaz, the first Latina and Asian American elected to the state Senate. Attorney General Maura Healey, who has yet to announce her campaign, is viewed as an early Democratic frontrunner.

For her part, Allen comes from a family of activists. Her maternal great-grandparents fought for women’s voting rights, and her paternal grandfather helped found one of the first NAACP chapters in northern Florida.

“There’s people at the top kicking down on people below,” Allen said. “I think that’s really what the perspective of a Black woman has to give. We have been looking up at the kicking for a long time, and I think we know what it takes to get the kicking to stop,” she added.

Stacey Abrams, the former Georgia House minority leader, is looking to avenge a tight 2018 governor’s race that she lost to Republican Brian Kemp by the slimmest of margins.

Since then, Abrams has worked to mobilize Black voters across the traditionally Republican state through a network of voting rights groups. She is widely credited with playing a leading role in helping Democrats win two U.S. Senate races earlier this year and helping President Biden flip Georgia blue for the first time since 1992.

In a video released earlier this month, when she announced her candidacy, Abrams vowed that she would center her campaign around uniting “one Georgia.”

“When elections are about politicians, it’s one and done,” Abrams told Yahoo News in a 2019 interview. “If you win, you lose, people move on. But when we remember that elections are about people, that it’s not a question of what I got, it’s a question of what people were asking for, then my responsibility is not to make my life easier by doing the dance that politicians are taught to do.”

Abrams was born in Madison, Wis., and raised in Gulfport, Miss., before moving to Georgia for high school. She eventually attended all-women’s HBCU Spelman College for her undergraduate degree before attending Yale for her law degree.

Her rematch against Kemp is widely regarded as one of the marquee races of the 2022 election cycle.

Connie Johnson, a former Democratic state senator from Oklahoma City, is running for governor again after losing in the 2018 Democratic primary.

“I was the only woman and the only Black person in the [2018] race for governor,” Johnson told the Black Wall St. Times earlier this year. “Needless to say, times have changed since then in dramatic ways. … We’ve been changed forever by the pandemic, by what happened to George Floyd and the protests and people waking up all over the world. This change requires experience and leadership.”

Johnson, who has an uphill battle against her state’s Republican tilt, wants to create “Oklahoma 2.0,” which includes a focus on access to medical marijuana, health care and infrastructure.

Born and raised in Oklahoma, Johnson worked as a legislative analyst for the Oklahoma Senate from 1981 to 2005 before serving as a state senator for nearly a decade. She is a staunch critic of the death penalty; Oklahoma has executed 197 people since 1915.

Deidre DeJear was born in Jackson, Miss., was raised in Oklahoma and found a home in Iowa after attending Drake University. A business owner and activist, DeJear already made history in 2018 as the first Black candidate nominated for statewide office in Iowa when she ran for secretary of state.

In an interview with Yahoo News, DeJear said she is emulating her personal role model from her home state of Mississippi: Fannie Lou Hamer, who embarked on a treacherous journey of fighting for women’s rights and civil rights at a time when those efforts were extremely dangerous.

“Just reading about her growing up and connecting what she went through at the time that she was in her 30s to what we are going through now, while I’m in my 30s, [is remarkable],” DeJear said. “I’m just ready for states like Iowa to stand up and rise to the occasion, and I know we’re ready in this state and I know folks across the country are ready for this as well.”

DeJear acknowledges the challenges she faces in a state that is 90 percent white and less than 4 percent Black. But she also touts Iowa’s historic progressive roots, which include leading the nation in the desegregation of schools in the 1860s. Then-Sen. Barack Obama also kick-started his historic presidential campaign with a win in Iowa’s 2008 primary.

“There’s no use of waiting when we’ve got potential energy that can be turned into kinetic energy at the ballot box,” DeJear said. “When I am amongst Black women, I am amongst women who are OK with having a wide vision of what success looks like rather than a narrow vision,” she added.

DeJear is one of several Democratic candidates in the race. Because of the state’s Republican shift under Donald Trump, the Democratic gubernatorial nominee is expected to face tough odds against Reynolds.

Mia McLeod has been a state lawmaker for a decade, including stints in both the state House and state Senate. Now McLeod is the first Black woman to run for governor in the state’s history.

She is running to “make South Carolina a place where everyone can thrive,” according to her website.

McLeod was raised in Bennettsville, S.C., before obtaining her undergraduate and law degrees from the University of South Carolina. She is a seventh-generation South Carolinian, and her family owns a 100-year-old small business in the community where she was born.

“I believe in a South Carolina where the governor has the courage to lead, the compassion to feel empathy for others … and the conviction to stand, even if she has to stand alone,” she said in her announcement video this summer.

McLeod is hopeful that her top priorities in investing in people and the local economy can overcome an uphill battle in a state that hasn’t elected a Democrat to statewide office in 15 years.