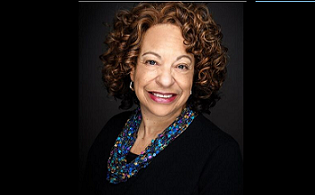 FEATURED PHOTO: REVEREND SUSAN K. WILLIAMS SMITH IS THE FOUNDER OF CRAZY FAITH MINISTRIES AND AUTHOR OF ‘WITH LIBERTY AND JUSTICE FOR SOME’

That seems to be the situation when it comes to the way many police officers treat people of color. Whether a suspect is male or female, if he or she is Black or Hispanic or any identity other than white, the likelihood of excessive police violence is likely.

Susan K. Smith is an activist, musician, pastor, and writer living in Columbus, Ohio. The founder of Crazy Faith Ministries, she is also the director of Lay and Clergy Development at the Samuel DeWitt Proctor Conference, Inc.

Columbus police officers verbally abused, punched, and kicked Timothy Davis when they arrested him more than four years ago.

Last month, a jury denied all claims Davis’ civil rights were violated by the eight officers and the City of Columbus.

Black people, especially, are seen as particular threats, with police saying they had to use excessive force because they were “in fear for their lives.”

Timothy D. Davis’ arrest in 2018 led to protests over the use of force by Columbus police. He filed a civil rights complaint against the city and its police officers. A jury in December 2021 sided with police.

They are trained to regard Black and brown people as “the enemy” and in training, a so-called “warrior mindset” is cultivated.

The so-called “fear for my life” argument has no weight when a suspect is running away, or, as was in the case of Timothy Davis and other Columbus police officers who beat him, a suspect has been wrestled to the floor.

The “warrior mindset” seems to intersect with a prevalent belief that Black people are worse than whites, more dangerous, and therefore, more worthy of what we see as excessive violence. What officers share, however, is that they are acting as they have been trained.

They are following protocol.

There are beliefs and myths about Black people that have governed the way white officers police them from the beginning of policing in this country.

White people have historically been deputized to keep Black people in line, to stay in place.

Efforts by Black people to challenge police are reasons to exert force, where in similar situations involving a white suspect, white police officers seem much more pliant and patient.

The cry for police accountability is too often ignored; Black arrests leading to severe beatings and even death are viewed as being the fault of the suspect. Little attention is given to the ways in which white suspects are treated differently in similar situations.

When Dylann Roof shot and killed nine people in a church in South Carolina, police were able to apprehend him and arrest him in spite of knowing he had committed a mass murder. Instead of shooting him, they bought him Burger King before taking him to jail.

Few in the Black community believe that a Black suspect would have received the same kind of grace.

In the case of Timothy Davis and the other eight officers who participated in his beating, one can argue that he should not have “resisted” arrest, but what antagonizes a community that has for too long dealt with police officers who beat and kill Black people and get away with it, seeing a suspect being beaten as was Davis pours salt into an already existing and ever-present raw wound.

These situations are never going to end until police are trained differently and until the accused officers suffer financial retribution. If they never receive consequences, and if police departments do not have to worry about how they will survive with the money they have to pay as an institution, nothing will change.

This is why we need a pattern or practices investigation by the Civil Rights Division of the U.S. Department of Justice.

The “warrior mindset” is not an excuse to brutalize people, especially if the brutalization is meted out most often to Black and brown people. Police departments need to admit they have a problem and work to fix it.

They are not soldiers and the suspects are not “the enemy.”

The real enemy is a system that looks the other way as lives are taken with the blessing of a society that couldn’t care less.

Rev. Susan K. Smith is founder of Crazy Faith Ministries. The activist and writer is also the director of lay and clergy development at the Samuel DeWitt Proctor Conference, Inc. Rev. Smith is the author of ‘With Liberty and Justice for Some.’