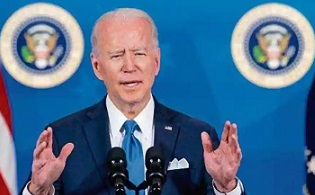 Orders for up to four tests per household can be placed using a website, COVIDTests.gov. The administration will also set up a phone number so those without access to computers or high-speed internet can place orders.

The White House said tests will usually ship within 7-12 days of ordering, meaning most Americans won’t receive them until the end of January.

People ordering tests will input their name and mailing address on the website and can share an email address to get updates on the order, officials said. It was created with help from the U.S. Digital Service, a federal program created to make federal tech better in the wake of the botched roll-out of the healthcare.gov website for Obamacare health insurance in 2013.

“We’re ready for this,” an official told reporters, saying they were cognizant of the need to make sure the website works.

Details of the website comes a day after President Biden announced that the administration will buy another 500 million at-home COVID-19 tests for Americans in addition to his plans detailed last month to order 500 million tests. He also said the White House will make high-quality masks available for free, with details coming out next week.

The U.S. Postal Service, meanwhile, is preparing to facilitate the mailing of the at-home test kits. Mark Dimondstein, president of the American Postal Workers Union, told NPR that up to 7,000 temporary workers will be hired, some of whom were already employed as holiday help, to package and address the test kits at 43 fulfillment centers around the country.

“We’re very excited, and at the end of the day, we’re here to serve the people of the country and we’re dedicated to that mission,” Dimondstein said. “Postal workers are ready to rock and roll.”

The Postal Service would not comment on the specifics, but in a statement, Postmaster General Louis DeJoy said:

“The United States Postal Service is proud to fulfill its mission of service to the nation by delivering Covid test kits as part of this important public health initiative of the Biden Administration. The 650,000 women and men of the United States Postal Service are ready to deliver and proud to play a critical role in supporting the health needs of the American public. We have been working closely with the Administration and are well prepared to accept and deliver test kits on the first day the program launches.”

Biden on Thursday also again urged Americans to get vaccinated and get booster shots to prevent the further spread of the disease and to take the stress off hospitals and medical staff.

“If you haven’t gotten vaccinated, do it,” Biden implored. “Personal choice impacts us all.” He called COVID-19 “one of the most formidable enemies America has ever faced. We’ve got to work together, not against each other.”

The medical teams are being sent to the Cleveland Clinic in Ohio; Coney Island Hospital in Brooklyn; Rhode Island Hospital in Providence; Henry Ford Hospital just outside Detroit; University of New Mexico Hospital in Albuquerque; and University Hospital in Newark, N.J. Facing criticism over its response to the highly contagious omicron variant, the White House says that since Thanksgiving, over 800 military and other federal personnel have been deployed to 24 states and that 14,000 National Guard members have been activated in 49 states to help with everything from clinical care to administering vaccines. The deployments