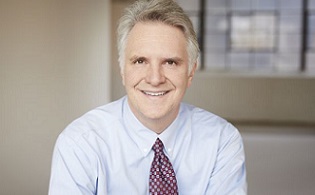 More than 20 years ago, when Cuyahoga County Commissioner Jane Campbell was running for mayor of Cleveland, she hired a 32-year-old county planner and executive assistant named Chris Ronayne to manage her campaign.

They won, and Ronayne followed Campbell to City Hall. Four years later, they were out.

After that, Ronayne pursued a career path just outside of local politics. But now he is making a bid for the highest office in county government: Cuyahoga County executive.

He and at least two other Democrats – former State Sen. Shirley Smith and Tariq Shabazz – are seeking the county party’s endorsement. Party executive committee members are scheduled to take that vote Wednesday evening.

Ideastream Public Media has been interviewing county executive candidates of both parties and will publish profiles of them in the coming days.

“I think we’ve hit sort of a point in time where people have said, ‘Enough,’” Ronayne said. “It is time to make sure that we have a government that’s accountable, that’s effective in its delivery services and that it is truly one where people’s feedback is heard and that there’s an ongoing communication.”

That change message might sound familiar to those who followed Mayor Justin Bibb’s campaign last year. Ronayne has scooped up a field director and treasurer from Bibb’s campaign team.

“I’ve built a platform around the idea of healthy communities, healthy economy and healthy government,” he said. “Really, when you’re looking at making sure communities are safe, they’re solvent and they’re successful, you’ve got something.”

During the Campbell administration, Ronayne served first as planning director and later as the mayor’s chief of staff. There, Ronayne helped the mayor draw up plans for the lakefront that would slowly take shape after Campbell left office.

“There isn’t a person I talked to who doesn’t say, ‘We live on the water, why don’t we make better connections to it?’” he said. “So we got things started. And I’m excited about the progress, particularly with the Metroparks, but there’s so much more to do.”

When Campbell lost her bid for reelection, Ronayne landed at University Circle Inc. as the nonprofit’s new president.

UCI, as it’s known, plans events and facilitates real estate development around Cleveland’s East Side museums, hospitals and Case Western Reserve University. It has a budget of $10 million and its own police force.

Ronayne returned to politics in 2010, running for a seat on the newly formed 11-member Cuyahoga County Council. He lost the Democratic primary to Dan Brady, a former state lawmaker and city councilman.

Ronayne considered running for county exec in the 2014 election cycle, but decided against it. Now he’s in the race for real. He’s been campaigning since last summer, when he stepped down from UCI.

One of the county executive’s big responsibilities is managing the Cuyahoga County jail. It’s been more than three years since a U.S. Marshals Service report decried conditions there. And the Budish administration is forging ahead with plans to build a new, likely bigger jail.

Ronayne said the county should apply some pressure to the breaks on that plan, and encourage alternatives to jailing – like addiction treatment and police response teams that include mental health experts.

“These are the things I think we need to fully, fully put in place before we just go to the brick-and-mortar solution of a new jail,” he said.

During Ronayne’s time at UCI, the University Circle neighborhood grew as apartment buildings went up. That’s prompted concern in nearby neighborhoods that with rising property values come rising taxes.

Ronayne said the county needs more good quality affordable housing, along with so-called “middle market” housing found in cities like Parma or South Euclid. Neighborhoods ought to have housing that suits the needs of people at all stages of their lives, he said.

An early test of the strength of Ronayne’s candidacy will come next Monday, the deadline to reveal campaign fundraising so far. From there, it’s roughly a three-month sprint to the May primary.

The Democrat who wins that race will face Republican Lee Weingart in November.