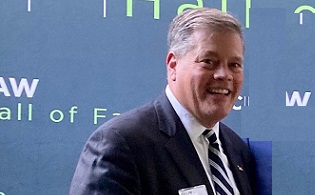 The great majority of Cuyahoga County Common Pleas judges are white. The great majority of the criminal defendants they sentence are Black. On its face, it would seem the county residents who had the most contact with the courts would be the ones most likely to vote in judicial elections. But an analysis by The Marshall Project found that wasn’t the case. Ideastream Public Media’s Amy Eddings talks to Rachel Dissell, a Cleveland-based contributor to The Marshall Project, about whether this is contributing to racial disparities in criminal justice outcomes.

The Marshall Project created a database culled from court records over six years and compared that data to county voting records. Tell me what you learned.

So, by looking at both the court data and the data from elections, we were able to see that Cleveland residents make up about two-thirds of defendants that are in the court, but they cast less than a quarter of all the votes for judges’ races. So, that means that voters who live in predominantly-white suburbs, they have about three times the power of the vote in casting them for judges.

Is this disparity contributing to racial disparities in sentencing and bail and other decisions that judges make? Could you, can you, connect those dots?

Yeah. So, I don’t think it’s as easy as making a direct connection from voting patterns to outcomes in cases because there’s just so many factors to consider. But systemically, we can say that the decision-makers in cases, the judges, do matter. We do know that these disparities began earlier in the process, based on factors like poverty and opportunity, in which neighborhoods are getting policed and who prosecutors choose to charge. But we were able to show that the courts and the decisions that are being made by judges don’t mitigate those disparities. And in fact, they seem to get a little bit worse because Black defendants make up about two-thirds of the cases that come into the court, and then about 75 percent of the people that have been incarcerated from the county in recent years.

Why are voters who live in Cleveland’s predominantly Black neighborhoods less likely to cast a vote in a judicial race?

So, and that goes beyond voter turnout, by the way. You know, we have neighborhoods where there is low turnout, but in some of these places we looked, there’s folks that do go to the polls and maybe they vote for president or mayor, but they still are skipping out on judges’ races. We wanted to know more about that. So we talked to residents who live in those places and got kind of a complex picture. You know, we have a lot of folks who talk about a lack of information, but also people who don’t want to participate in a system that’s unfair or feels racist or harmful to them and their lives.

The people you interviewed — the Cleveland Documenters talked to more than 40 people — what did they say they wanted to know? What information did they want about a judge?

People really wanted to know more about how judges made decisions, you know, if they really pushed for rehabilitation or if they were lenient for folks who were first offenders. They also wanted to know more about how fair judges were in sentencing people of different races or from different socioeconomic statuses, and not having this information often made it hard for them to vote in a race.

Why isn’t this information available?

A lot of government entities have to follow Ohio public records law, but the court gets to decide what information it wants to release and which information it doesn’t want to release. And historically, the court has been resistant to releasing its data, especially in ways that can be connected to individual judges. So The Marshall Project data team — which is pretty amazing, it is the first time I’ve gotten to work with them — had to work with a developer to create a tool that would kind of crawl across the county court’s docket and pluck all of those individual pieces of case information from the website and then assemble them back together in a database. So if it took The Marshall Project all that effort, just imagine an individual voter trying to get information to assess how well a sitting judge is doing and whether they deserve their vote.

Cuyahoga County Administrative Judge Brendan Sheehan defended this reticence in providing a judge’s sentencing record. What was his argument?

You know, I think Judge Sheehan’s concerns were the same that I’ve heard from a lot of judges, that it’s not fair to measure judges based on the decisions they make in individual cases because individual cases are so complicated. But it’s probably not fair for voters not to have all that information. We measure a lot of things with data. We measure the outcomes of doctors and patients and hospitals. So even though it’s complex and even though it’s difficult, I think it’s still worth doing. And I think that voters and residents deserve the information.