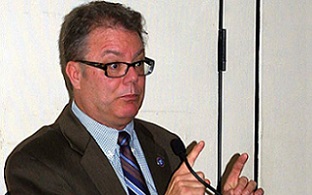 Cuyahoga County is considering two options for the future of the courts building in Downtown Cleveland, each comes with an estimated cost of around $1 billion.

The first option is a renovation of the existing tower at the Justice Center and replacement of the jail buildings with offices for the sheriff’s department, probation department, public defender and Cleveland municipal court. The estimated cost for that option, including the cost of keeping the courts running in an annex building while the work is done in phases for the next 20 years, is almost $1.3 billion.

The second option is building a new court tower somewhere Downtown, with a price tag of close to $900 million. A new site would require about two city blocks, according to the consultants hired by the county.

The Cuyahoga County Justice Center Steering Committee heard a detailed presentation on the two options during its meeting Thursday. No votes were held. The committee agreed in November to build a new jail at a separate location, with an estimated cost of $500 million.

The committee includes county, city and court officials, as well as the county prosecutor, public defender and sheriff’s department. The county is proposing to pay for the new jail by extending a sales tax originally created to pay for the convention center.

It’s unclear how work on a court tower project would be paid for. One unresolved question is how much Cleveland would contribute.

County Councilman Mike Gallagher said they’ve estimated the city’s use of the Justice Center — where its municipal court, clerk and law department all use space — at about 30 percent. He said it’s not clear whether the city would even remain in the new or renovated building.

“What’s Cleveland doing? Where are they at? Are they in? What’s their cost?” Gallagher said. “If they can get a roundabout figure of what it’s going to cost them to be knee-deep in this, then we can have this broad discussion.”

The city’s representatives at the meeting, Law Director Mark Griffin and City Council President Blaine Griffin, both said the city is not ready to make a commitment.

Mark Griffin pointed to a potential loss of tax revenue because of work-from-home policies during the pandemic. And he said this sort of spending is not a priority for new Mayor Justin Bibb.

“The mayor just delivered a budget and a transition plan,” he said. “And let me tell you that expenditures for a court’s tower was not part of that plan, it was not something that was anticipated.”

The law director asked the committee to consider alternatives, like buying an existing office tower Downtown.

The committee has not set a date for its next meeting.