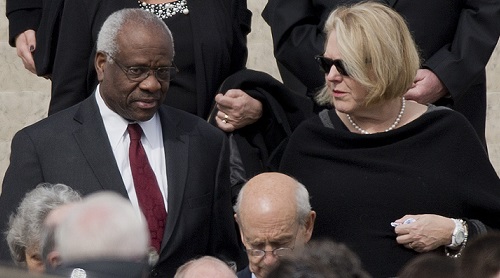 God bless each of you,’ Ginni Thomas wrote in a Facebook post to support the attempted takeover of the Capitol.

Ginni Thomas, the wife of Supreme Court Justice Clarence Thomas, shared support for the rioters who stormed the Capitol on Wednesday.

On Facebook, Mrs. Thomas expressed explicit love for the violent chaos carried out by supporters of outgoing President Donald Trump, who are against the confirmation of President-elect Joe Biden. Mark Joseph Stern, a staff writer at Slate, shared screenshots of the status updates on Twitter.

In one post, she shared “LOVE” to the MAGA crowd, offering support and suggesting others to tune in to the riot. In another Facebook status, she stated, in mostly all caps, “God bless each of you standing up or praying!”

According to Stern, Thomas has not posted since.

According to Law and Crime, both her public Facebook page and the messages are no longer available. It is not clear whether or not the removal of the platform was done by Thomas herself or forcibly removed.

This is not her first time in the spotlight for supporting racism. theGrio reported Mrs. Thomas requested the mayor of Clifton, Virginia, to remove a Black Lives Matter banner in the town.

According to the news report, the welcoming message was championed by Mayor William Holloway in solidarity with visitors who may enter the predominantly white city.

The banner shared the message “Welcome to Clifton where Black Lives Matter.”

““Would you please remove the BLM sign from Clifton?” Thomas wrote to Holloway according to theGrio. “As leaders of this community, you should be smarter than promoting such a group as this, who uses race to foment chaos to destabilize the nation.”

According to Independent, Mrs. Thomas is allegedly a member of a network of conservative activists called Groundswell. The group has close ties to Trump and his senior officials, according to the report.

Thomas reportedly helped craft lists of “disloyal” government officials, and detailed memos are said to have been written by Groundswell over the past year-and-a-half.