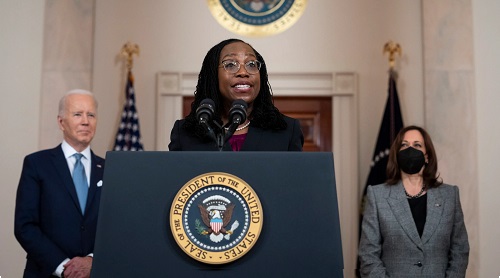 A brief look at the career of the first Black woman SCOTUS nominee.

Ketanji Brown Jackson will made history by becoming the first Black woman to be nominated to the US Supreme Court. Here’s a look at the 51-year-old federal judge’s background and career.

Her legal career has revolved around public service. She worked as a federal public defender and clerked for two judges on the federal bench, along with Justice Stephen Breyer, who she would replace on the court if confirmed.

She became a judge when she was nominated to a federal District Court seat in 2010 by her fellow Harvard alumnus, president Barack Obama. She was even considered a potential SCOTUS nominee under Obama after the late Justice Antonin Scalia died unexpectedly in 2016. Instead, Obama nominated current Attorney General Merrick Garland, who never received a confirmation hearing in the then GOP-controlled Senate.

Garland would become Biden’s choice for AG, and Jackson was nominated and confirmed to succeed him in the U.S. Court of Appeals for Washington, D.C., which is considered second to only the Supreme Court in the scope of its judicial power.

Jackson’s cases and opinions have been consequential. She was a member of the federal sentencing commission that overhauled mandatory minimum drug punishments. She also found herself opposing many controversial legal moves by the Trump administration.

As a district court judge, Jackson issued several high-profile rulings. In 2019 she ruled against the Trump administration’s attempt to shield former White House counsel Don McGahn from testifying before Congress, writing that “presidents are not kings.”

Several of Jackson’s rulings were overturned by a higher court, including those on Trump’s attempt to fast-track deportations and executive orders constraining government unions’ power.

Ironically, she is related by marriage to former Republican Speaker of the House Paul Ryan.