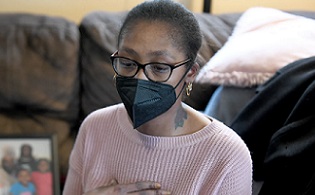 FEATURED PHOTO: MARQUETTA WILLIAMS WIFE OF JAMES WILLIAMS SHOT BY POLICE ON HIS PROPERTY WITHOUT WARNING WHILE SHOOTING HIS GUN IN THE SKY ON NEW YEARS EVE

The family of James Williams, a Black man who was fatally shot without warning by a white Canton police officer minutes into the New Year, has filed a federal civil rights lawsuit against the officer and the city of Canton in federal court.

Williams, 46, had been firing celebratory gunfire skyward from behind a 6-foot-tall (1.8-meter-tall) privacy at his home when officer Robert Huber fired multiple rounds through the fence as smoke rose into the air. Footage from Huber’s body camera showed him shouting “Get down!” after he had shot Williams, who died at a hospital.

Canton Police Chief Jack Angelo on the day of the shooting said the officer was outside his vehicle and confronted someone who began shooting a firearm. Angelo said the officer feared for his safety and fired his duty weapon at the person, striking him.

Canton Mayor Thomas Bernabei released a statement to The Canton Repository, which first reported on the lawsuit, that the city had no comment. The statement noted that the shooting is being investigated by the Ohio Bureau of Criminal Investigation and that its findings would be presented to a Stark County grand jury to determine whether criminal charges would be filed.

Messages were left with Huber’s attorney on Thursday.

At a news conference Williams’ widow, Marquetta, said, “I will fight today, tomorrow and every day until I have no breath left because it’s my family today but may be yours tomorrow.”

The lawsuit seeks unspecified compensatory and special damages for claims that include excessive force, wrongful death, deliberate indifference to medical needs, assault and battery and intentional infliction of emotional distress.

Williams was the father of four daughters and stepfather to two more. His three minor children with Marquetta Williams are named as plaintiffs in the lawsuit.