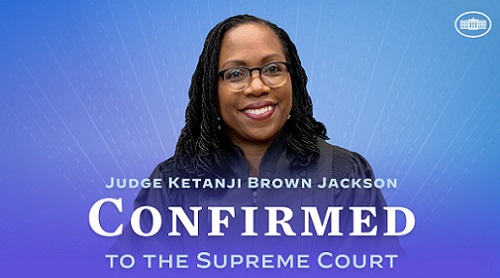 Judge Ketanji Brown Jackson proclaimed the progress her confirmation to the Supreme Court represents and offered her gratitude to the many people who she said helped her along the way at an event on the White House South Lawn on Friday.

“It has taken 232 years and 115 prior appointments for a Black woman to be selected to serve on the Supreme Court of the United States, but we’ve made it! We’ve made it — all of us,” Jackson said.

“I have dedicated my career to public service because I love this country and our Constitution and the rights that make us free,” Jackson also said.

Quoting poet Maya Angelou, Jackson said, “I am the dream and the hope of the slave.”

“In my family, it took just one generation to go from segregation to the Supreme Court of the United States,” she added, also offering a tearful tribute to her daughters. Jackson also thanked Democratic Senate leaders and numerous White House staff involved in her confirmation process.

Vice President Harris and President Biden spoke before the future justice, often to raucous applause from an audience that included Jackson’s family, friends, administration staff, Cabinet members and Democratic lawmakers. Supreme Court justices and all lawmakers who voted for Jackson, including Republicans, were invited to the event. The justices and Republican Sens. Mitt Romney, Susan Collins and Lisa Murkowski declined to attend, though Biden praised the trio of Republicans, noting Romney’s father George’s support for civil rights in the 1960s.

Biden also decried “verbal abuse, the anger, the constant interruptions, the most vile, baseless assertions and accusations” from some Republican senators during confirmation hearings, saying the nominee displayed “the incredible character and integrity she possesses.”

Biden took time to praise Jackson’s “dignity” and said her confirmation is a fulfillment not just of a campaign promise he made, but of a definition of America he said he offered to Chinese President Xi Jinping years ago as a nation of “possibilities.”

Biden recognized a couple of younger Black women in the audience who had voiced their feelings of inspiration from the judge, including a young woman who said she wants to be a Supreme Court justice one day.

Vice President Harris spoke of writing a note to her goddaughter during the Senate vote.

“I told her that I felt such a deep sense of pride and joy and about what this moment means for our nation, and for her future. And I will tell you, her braids are just a little longer than yours, but when I wrote to her I told her what I knew this would mean for her life and all that she has in terms of potential.”

“The young leaders of our nation will learn from the experience, the judgment, the wisdom that you, Judge Jackson, will apply in every case that comes before you,” Harris also said.

Jackson was confirmed by the Senate on Thursday in a 53-47 vote with all members of the Democratic caucus and three Republicans voting for her nomination. She will assume her duties on the court in early summer when Justice Stephen Breyer retires.

After her graduation from Harvard Law School, Jackson clerked for Justice Breyer on the Supreme Court.

Jackson, 51, went on to serve eight years as a federal trial court judge and was confirmed in June for a seat on the U.S. Court of Appeals for the District of Columbia.

Before becoming a judge, she worked as a public defender and will be the first Supreme Court justice since Thurgood Marshall with experience representing indigent criminal defendants.

It is possible that Jackson could be the only Supreme Court justice that Biden has the opportunity to see through the confirmation process. Democrats could lose control of the evenly divided Senate after this fall’s midterm elections, giving Republicans the votes to block confirmation of any further nominees.

Two justices were successfully confirmed during Barack Obama’s presidency. During his term in office, Donald Trump named three justices to the court.

In an interview with Axios on Thursday, Senate Minority Leader Mitch McConnell declined to say whether he would hold hearings for any future Biden Supreme Court pick if Republicans regain control of the chamber.

In 2016, McConnell refused to hold hearings for Merrick Garland, Obama’s nominee to replace the late Justice Antonin Scalia, saying the winner of the pending presidential election should appoint Scalia’s successor.

After Justice Ruth Bader Ginsburg’s death before the 2020 presidential election, McConnell went against his precedent and confirmed Trump nominee Amy Coney Barrett in a record 30 days.