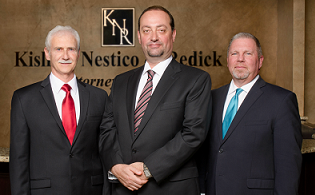 — An appeals court has ruled that a key portion of a class-action lawsuit against the Akron-based personal injury law firm Kisling, Nestico and Redick can proceed.

A three-judge panel of the Ninth District Ohio Court of Appeals last week unanimously upheld a lower court’s decision that grants class-certification to former clients whom the law firm charged a $50 fee for investigative services that attorneys suing the firm say were never provided.

The firm’s representatives said in depositions and affidavits that the fee could apply to as many as 45,000 clients dating back to 2008.

The appellate panel, however, reversed a decision granting class-action status to a claim that the law firm funneled clients to Wadsworth chiropractor Sam Ghoubrial, who is accused of overbilling those patients to inflate settlements. The appellate panel sent the issue back to the trial judge for further examination.

Peter Pattakos, the lead attorney for the five former clients of the firm who filed the lawsuit in September 2016, said in a statement that the opinion is “clear, comprehensive and well-reasoned.”

“The [appellate court’s] ruling ensures that these claims will be litigated fully, fairly, efficiently, in accord with Ohio law and bolsters our confidence that the affected clients will recover the fees that KNR and Dr. Ghoubrial wrongly charged them,” Pattakos said.

Jim Popson, the lead attorney defending the law firm against the suit, said in a statement that it continues to dispute the issue of the investigative fee.

“As for the claim relating to a $50 investigator fee paid to third parties for work performed, while the Court of Appeals found the allegations suitable for a class action, there has been no finding of liability against KNR on the merits of that claim, which KNR continues to dispute,” Popson wrote. “KNR reserves its right to appeal that portion of the ruling.”

James Brogan is a retired Dayton-area appellate court judge tapped to oversee the lawsuit after the Summit County judges recused themselves. In December 2019, he granted class-action status based on two claims in the lawsuit.

In a 56-page ruling, Brogan held that the investigation fee the law firm charged nearly all of its clients was essentially no more than an “ambulance-chasing fee” used to pay third-party investigators to visit and sign-up future clients.

Brogan also found that evidence produced through depositions and pre-trial discovery showed that Ghoubrial “substantially overcharged his patients” who were also law firm clients, and it should at least be a question for a jury to decide if the law firm was aware of the high prices.

Brogan did not grant class-action status to a claim in the lawsuit that the firm provided kick-backs to doctors in exchange for writing narrative reports about patients’ care.

Brogan found that the law firm charged nearly all of its clients a $50 fee for “investigative services” that it used to pay investigators from two private companies, regardless of the amount of investigating that each case required.

The plaintiffs argued that the investigators, who had offices in the law firm’s properties and used computer tablets that the firm provided, did little more than contacting people who were recently in car accidents and convinced them to hire the firm to seek a personal injury settlement.

The law firm did not keep any accounting or log of the actual services that the investigators provided to each client in exchange for the fee, the order said.

The appellate court held that, because the plaintiff’s allegation was that the fee was an across-the-board fraud, people who were charged the fee qualify as a class and can seek reimbursement from the firm.

Ghoubrial, who made more than $8 million from the law firm’s clients, refused to accept insurance from the firm’s clients and charged them anywhere from $400 to $1,000 for a series of pain injections that other clinics offered for far cheaper, the lawsuit says.

“It is clear that payments made to Dr. Ghoubrial in this manner insured the charges he made would escape scrutiny by the insurance carriers and other government agencies,” Brogan wrote.