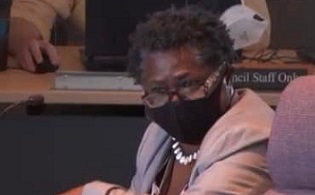 A stalled loan deal to pull Cleveland’s Shaker Square out of receivership is moving again after the local city councilwoman gave the project the green light.

Key city council committees will take up legislation allowing the $12 million city loan at a meeting on Monday, Ward 4 Councilwoman Deborah Gray told a meeting of the Shaker Square Alliance.

Gray, who took office in January, said that she had needed time to understand the deal’s finances and gather resident input before supporting it.

“It was a hard, long decision for me to make for the community as a whole,” Gray said. “I had to get the feedback from the south side of Ward 4, which is Mt. Pleasant. And every resident in this community has a voice, that has a concern, and they have a right to speak to what will be developed in Ward 4 as a whole.”

The councilwoman’s announcement was met with some cheers and muted applause on the virtual Zoom meeting.

The loan will allow Burten Bell Carr Development Corporation and a subsidiary of Cleveland Neighborhood Progress – both nonprofits – to pay off the mortgage debt of the owner, The Coral Cos. The square has been in receivership for more than a year, after the lender, Delaware-based Wilmington Trust, sued to foreclose.

Representatives of the two nonprofits have said they plan to make capital improvements in the East Side retail square.

Gray’s predecessor, then-Councilwoman Anita Gardner, had put a hold on the deal late last year. The fate of the property – and the foreclosure proceeding – hung in limbo for months. Wilmington Trust has asked the court twice for a phone conference status update.

Although the deal has support from Mayor Justin Bibb and Council President Blaine Griffin, Gray’s withdrawal of objection was essential. Council typically defers to the wishes of local council members in development projects.

Council will consider the deal at a joint meeting Monday of the finance and development, planning and sustainability committees, according to a council spokesperson. Such a hearing is typically an ordinance’s last stop before coming to the floor for a Monday night vote of passage.

Gray has discussed the deal in public meetings this year, including one attended by both Bibb and Griffin in late March.

In a newsletter provided to Ideastream Public Media by Gray’s executive assistant, the councilwoman wrote that the deal will only succeed if the city can steady the surrounding neighborhood – particularly by making landlords fix up apartment buildings.

“I want to see Shaker Square thrive, and to do that we must also stabilize the apartment corridors by holding the owners of all the broke down apartment buildings accountable,” Gray wrote.