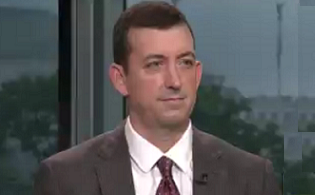 The Club for Growth, long seen as one of the most powerful groups in Republican politics, is sticking with its pick in Ohio’s messy GOP Senate primary despite attacks from top Trump allies backing a rival candidate.

The anti-tax organization, which is supporting former state treasurer Josh Mandel in the contest, has begun airing a new ad taking direct aim at the former president’s endorsement of venture capitalist J.D. Vance. Trump backed Vance, the author of “Hillbilly Elegy,” despite Vance’s previous criticism of him.

In the new ad, actors portraying Ohio voters are shown old footage of Vance knocking Trump. In one clip, Vance is shown declaring himself “a Never Trump guy” — a label used by Republicans who refused to support Trump in 2016 and 2020. In another clip, Vance suggests he might vote for Hillary Clinton, Trump’s Democratic opponent in 2016.

“Has Trump seen this?” asks one actor in the ad after viewing the footage, later saying of Vance, “Where does he get off saying that?”

Another actor says, “We’ve got our own eyes and our own ears.”

The ad also includes a reference to Trump’s support of Mitt Romney, with an actress disdainfully noting, “How’d that turn out?” Romney, now a Republican senator from Utah, has since emerged as a leading Trump critic within the GOP and voted twice for Trump’s impeachment.

“Look, I love Trump, but he’s getting it wrong with J.D. Vance too,” says another actor.

It is not the first Club for Growth ad highlighting Vance’s past statements. Late last year, Trump reportedly asked the group to stop airing its ads — which featured Vance calling him “idiot,” “noxious” and “offensive” — worrying that they would hurt Trump’s popularity in the state.

The Club for Growth spent $71 million supporting Republican candidates in the 2020 election and has so far raised $38 million for the 2022 midterms, spending $13 million. For his part, Vance has become a stalwart Trump supporter in recent years and is a regular guest on Tucker Carlson’s primetime Fox News program.

According to the New York Times, Trump expected the club’s media campaign to stop once he endorsed Vance, but when the attacks continued, he had an assistant send the group’s president, David McIntosh, an angry and expletive-laden text message.

In response, a spokesperson for the group told Politico that the group was buying more ad time in support of Mandel. The president’s eldest son, Donald Jr., has since attacked both Mandel and the Club for Growth numerous times on Twitter.

Although the Club for Growth opposed Trump in the 2016 Republican presidential primaries, it quickly fell in line behind him once he won the presidency and supported his reelection effort in 2020. Trump and the club are backing many of the same candidates in Republican primaries this year, a fact that McIntosh attempted to emphasize to the New York Times.

“I very much view this as one race where we’re not aligned, we’re on opposite sides, which doesn’t happen very often,” he told the newspaper.

Trump’s endorsement appears to be paying off in the crowded Ohio primary, which includes a number of other candidates in addition to Vance and Mandel. A Fox News poll released Tuesday showed Vance taking the lead in the race, with 23% support compared with Mandel’s 18%.

Republican senate candidate Josh Mandel at a campaign event in Cortland, Ohio, ahead of next month’s primary election. (Gaelen Morse/Reuters)

The primary will be held May 3. The winner is expected to face Democratic Rep. Tim Ryan in November’s general election.

Trump won Ohio in both 2016 and 2020 by 8 points. The nonpartisan Cook Political Report currently predicts that the Republican nominee will have the edge in the general election.

Trump’s April 15 endorsement of Vance roiled many Republicans in Ohio who are supporting other candidates in the race to replace retiring GOP Sen. Rob Portman. The former president held a rally with Vance on Saturday night where he explained the endorsement.

“He’s a guy that said some bad shit about me,” Trump said of Vance. “If I went by that standard, I don’t think I would have ever endorsed anybody in the country.”