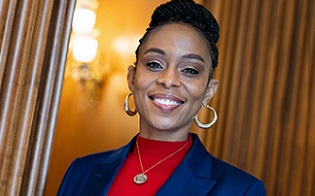 U.S. Rep. Shontel Brown fended off a challenge from Nina Turner in Tuesday’s Democratic primary, clearing her biggest hurdle on the road to winning a full term in Congress.

Brown claimed 66% percent of the vote to Turner’s 33%, according to initial results from the Cuyahoga County Board of Elections.

“I got a lot of work to do,” Brown told supporters at her victory party Tuesday night. “I’ve been doing a lot of work in a short amount of time, but I am ready to continue to work for you. So thank you. We’ve got some unfinished business.”

Bibb, himself a new figure in the city’s political scene, called Brown his “partner in Cleveland’s comeback.” The mayor downplayed the framing of the race as a contest between a left-progressive in Turner and a moderate in Brown.

“I don’t care what you call it: progressive, Democrat,” Bibb said. “I want a fighter in D.C.”

Brown will face former East Cleveland Mayor Eric Brewer, the winner of the Republican primary, in the November general election — a race she is favored to win in this heavily Democratic district.

As a county councilwoman, Brown won last year’s special primary and general election to serve out the term of Marcia Fudge, who left Congress to join President Joe Biden’s cabinet. Brown campaigned this year on her vote for the president’s infrastructure funding package. This past weekend, the freshman congresswoman announced that Biden had endorsed her candidacy.

Turner also fell short to Brown in the special primary last August. A former co-chair of Sen. Bernie Sanders’ presidential campaign, Turner ran on a progressive populist platform in both races. She decried the more centrist political groups that bought advertising to criticize her and support Brown.

Now running as an incumbent, Brown welcomed colleagues from Congress to the district for get-out-the-vote events in the final days of the race. She visited churches alongside such prominent supporters as Cleveland Mayor Justin Bibb and longtime South Carolina Rep. James Clyburn.

A number of endorsements shifted Brown’s way in this rematch. The Congressional Progressive Caucus, which supported Turner last year, backed Brown — now a caucus member — this time around. Most members of Cleveland City Council endorsed Brown, including some who had been on Turner’s side last year.

Turner had criticized Brown for remaining chair of the Cuyahoga County Democratic Party while running for — and serving in — Congress. Brown has already said she will not seek another term as party chair; a party leadership vote to replace her is expected in the coming weeks.

Uncertainty over district boundaries hung over this primary. The newly redrawn 11th Congressional District includes all of the city of Cleveland, many East Side suburbs in Cuyahoga County and the West Side suburb of Lakewood.

Legal challenges to Ohio’s congressional map are pending before the state Supreme Court, leaving open the possibility that the lines could be reshuffled again for the 2024 elections