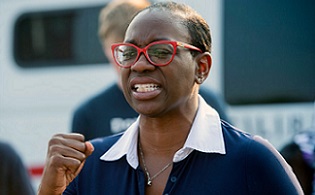 In this past week’s Democratic primary, challenger Nina Turner was soundly defeated by incumbent Congresswoman Shontel Brown. Brown took 66% of the vote to Turner’s 33%. In their first face off in 2021, Turner blew an early 15-point lead in the polls to go down to defeat.

In her concession speech, Turner put aside her prepared remarks and announced that “Sister Turner ain’t going no place.” I’m sure that Turner meant that in the positive sense that she will be around to fight another day — that she is staying in the political arena. But in the long run, it may turn out that the literal meaning is more appropriate — she ain’t going no place politically because there is nowhere else to go.

Justin Bibb’s election as mayor of the City of Cleveland last year means that any chances of Turner becoming Cleveland’s Lori Lightfoot or Keisha Lance Bottoms are zero for the next three years. Unless Bibb screws up royally or dies — both of which are unlikely — he’s in office for a second term taking him to 2029.

It’s unlikely after twice running for Congress that Turner would consider a run for Cleveland city council or a state legislative office — if there were a seat open. She’s been there and done that, and who wants to start out at the bottom of the seniority totem pole?

The Democratic nomination for county executive is already set with the victory of Chris Ronayne in last week’s primary. Even if she had thrown her hat into that ring, she would have had a steep hill to climb. The only Black candidates to ever win countywide elections in non-judicial races are the late Virgil Brown (a Republican), Peter Lawson Jones, and the late Stephanie Tubbs Jones.

With a virtual political desert for Democrats in Ohio — only Sherrod Brown and three Supreme Court judges are elected statewide —  Turner’s chances of taking a statewide seat are slim. In addition, she would have to wait for the next statewide election cycle 2026.

Turner lost in a race for Secretary of State back in 2014, garnering just 35% of the vote. Even with an endorsement and money from Bill Clinton, her “angry black woman” persona didn’t fly well on the hustings. And she lacked the grassroots support in urban areas to make up the votes she lost in the rural parts of the state.

Now she says that she has taken a cue from the LeBron James playbook and hints at plans to take her talents elsewhere — as in 1600 Pennsylvania Avenue. For someone whose only victory in a contested race came in a Cleveland City Council race in Ward 1 back in 2006, that’s a big step up  the political ladder. She won that seat when then Councilman Joe Jones left office after running afoul of the law. Jones’ wife and Turner ran in a nine-person primary to replace him with Turner coming in second.  But she ultimately came out on top in the general election.

From city council she moved to the Ohio Senate where she served from 2008-2014. That seat came as the result of a game of musical chairs maneuvered by the late Congresswoman Stephanie Tubbs Jones. Judge Lillian Greene retired from the bench to become County Recorder. State Senator Lance Mason filled Greene’s seat on the bench and Turner was appointed to the vacancy in the state senate created by Mason’s departure. When time came for retaining the seat, Turner ran unopposed.

Turner first made the national  spotlight in the Bernie Sanders campaign in 2016, after jumping ship from the Hillary campaign — a fact that the Clintons will not easily forget. In 2017 she became president of the Sanders-affiliated Our Revolution. In 2020 she was co-chair of the Sanders presidential campaign.

Her past appearances on CNN and MSNBC as a political analyst seemed to have dried up but apparently did a lot for her ego. In September of 2021 she was hired as a commentator and co-anchor of The Young Turks, a self-described “progressive/left wing” commentary program that appears on YouTube and selected television stations.

But in terms of her political future, Nina’s problem now is her brand. She has created an image of herself that is not likeable. Her flashy clothes, frequent changes of hairstyle and Baptist minister cadence to her speech don’t convey a sense of stability to voters — especially among older Black voters who are more likely to go to the polls. Other voters don’t see her as a team player at a time when Democrats need to stick together. Nor does she have the class and style of a Stacey Abrams.

Then there was the fateful day in the 2020 campaign when Turner made the ultimate “foot in mouth” statement about voting for Joe Biden being like eating a half a bowl of warm fecal matter.  That’s a comment that the Biden camp and hardline Democratic voters will never forget — a  comment that will likely be referred to in her obituary.

Through her work on the Bernie Sanders campaign, she made a lot of friends nationally. Hollywood stars have pumped money into her campaigns. But how many times can you go to the well? And as we saw last week with the defeat of U.S. Senate candidate Mike Gibbons, who poured $17 million of his own money into his campaign, money don’t buy you love or votes.

Nina Turner is now a three-time loser. Can we stick a fork in her? Her next campaign will be the determining factor. She can’t run for another office and lose — she must win. If she’s thinking of running for President, I wish her well. She’s not Barack Obama. She’s still the angry black woman from Cleveland, whose hip bone is connected to the thigh bone or what ever that phrase she uses in every speech. Turner has to come up in the winning column next time around. Otherwise she becomes a footnote in Ohio political history and a legend in her own mind.