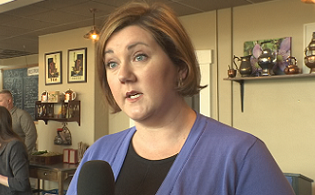 The Ohio Democratic Party has filed a lawsuit against Gov. Mike DeWine’s administration, saying they’re breaking the state’s public records law in turning over documents with information blacked out.

The lawsuit demands those documents related to the House Bill 6 corruption scandal be turned over without the redactions.

“Facing public pressure, DeWine released redacted documents that didn’t follow the law and refused to release the rest,” Walters said. “We’re not going to let DeWine stonewall his way out of responsibility for this scandal.”

While the $150 million nuclear bailout subsidies in the law have been repealed, Walters said taxpayer dollars are still going to two coal plants operated by the Ohio Valley Electric Corporation (OVEC), and are still appearing on ratepayers’ electric bills. She said $287,000 is being paid each day in subsidies to one of those plants, the Clifty Creek facility located in Indiana.

As Speaker, Householder championed the sweeping nuclear power plant bailout known as House Bill 6. He’s accused of controlling a 501(c)4 funded by FirstEnergy in exchange for passing that legislation to serve the utility’s interests. Householder has maintained his innocence, and is awaiting trial on corruption charges next January. He was expelled from the House last year.

In its deferred plea agreement, FirstEnergy said it paid a $4 million bribe to Randazzo before DeWine appointed him as chair of the Public Utilities Commission of Ohio. Randazzo resigned in November 2020 after an FBI raid of his Columbus home. Randazzo has not been charged with any crime.

Democratic candidates have made it clear that they intend to use the House Bill 6 corruption scandal in this year’s campaigns, including gubernatorial nominee Nan Whaley, who’s running against DeWine.

DeWine’s office said in a statement: “The Ohio Democratic Party has a history of mischaracterizing the results of public records requests, particularly in election years. The truth is the ODP has been provided thousands of pages of records in response to their requests. This is nothing more than a fishing expedition in a lake that has no fish.”

The statement goes on: “Governor DeWine is one of the most transparent public officials in Ohio, and no Governor has ever been more accessible to media than Mike DeWine. If the ODP wants to argue otherwise, good luck to them, because they are dead wrong.”

In the statement, DeWine’s spokesman also said, “noting that the lawsuit does not identify specific redactions that ODP takes issue with, we are as positive that none of the redacted events were related to HB 6 or HB6 legislative strategy.”