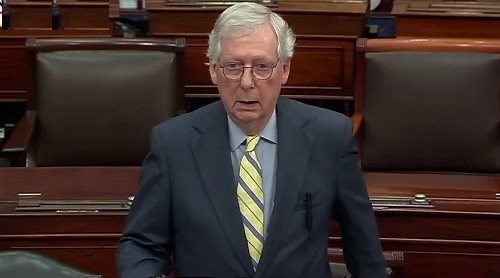 The GOP’s outrage about the memo leak–and not its contents–is yet another tactic to detract from their lack of a plan for the betterment of Americans.

In January, the Republican party stated they had no plans to present a legislative agenda for the upcoming midterm elections. I wouldn’t either if my plan was based on total obstruction regarding issues concerning women’s reproductive issues, voting rights, whitewashing education in schools, and blocking things like the enhanced child tax credit. However, the leaked draft opinion of the Supreme Court’s intention to overturn Roe vs. Wade changed that. Now, Republicans would certainly have to answer to a law that the American majority agrees should be kept in place.

But, in classic GOP fashion, their tactic when hot-button issues arise is to distract and deflect. As CNN reports, Senate Republicans gathered in a closed-door meeting to strategize how they would tackle the leaked document. If you saw the responses, they were laser-focused on two things: the leak “could damage the Supreme Court’s integrity,” and the leaker should be charged to the greatest extent of the law.

Most Republicans, even those who have been fierce opponents of abortion, have signaled that they don’t want to dive into the abortion debate — at least not right now.

That’s why the Senate GOP’s campaign arm was quick to put out a three-page messaging memo on Tadvising Republicans to “be the compassionate, consensus builder on abortion policy,” while hammering Democrats for supporting “late term abortions.”

Looking at a few comments from Senate Republicans, they were in lockstep to detract away from the actual substance of the leak.

Senate Minority Leader Mitch McConnell: “I think the story today is an effort by someone on the inside to discredit the institution of the Senate, which continues a pattern that we’ve observed over the last couple of years.”

Sen. Joni Ernst of Iowa: “We’ve got so much other stuff going on,” Ernst said. “One, we need to get to the bottom of who leaked this. … But then we’ve got the gas price issues, the inflation issues. So it’s almost like they are trying to detract from the issues that Americans are being affected (by).”

(Ernst is said to be within a group of Republican senators who will introduce legislation for a nationwide abortion ban if Roe v. Wade is overturned)

(This is the same representative who mixed up the Constitution and Declaration of Independence when pushing her anti-abortion agenda.)

Sen. Lindsey Graham (R-SC): “I don’t know how you can be upset with the court that wants to revisit precedent. How many people in the Democratic Party would like to revisit Citizens vs. United?

(Majority of Americans back a constitutional amendment doing away with Citizens United.)

This is where Democrats have to band together and make their case to the American people. They should not only speak to the recent history of Republican obstructionism and fearmongering, but also reiterate, if they gain House and Senate seats, their commitment to enacting policies like the Women’s Health Protection Act that will help Americans from all walks of life. The onus is also on us to recognize that senators like Joe Manchin and Krysten Sinema have hobbled many policies that would make things better, all under the fallacy of bipartisanship.

For all the dysfunction in the Democratic party, only one group of people committed to turning the country back to a time when the most vulnerable had no voice or rights whatsoever.

Democrats should not allow Republicans to frame things or run out the clock without a fight. Otherwise, we’ll get the following:

Republicans also don’t plan to shy away from the issue if they win the House or Senate, and have started internal discussions about which anti-abortion bills they might bring to the floor if they’re in power.

Thirteen states have already passed abortion ban “trigger laws” in anticipation of Roe v. Wade being overturned, and it won’t stop there. I guarantee you.