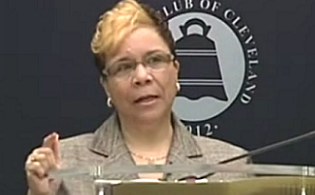 UPDATE: In response to the article below, Cleveland City Council President Blaine Griffin said that Ward 7 Council Member Stephanie Howse and Ward 9 Council Member Kevin Conwell, who is the current chair of the Health, Human Services and the Arts Committee, are taking his place as liaisons between city council and RAPHC-C. Griffin said that since he became city council president in January he has reduced his involvement with the coalition.

Griffin added that he missed the email and phone calls asking for comment on the coalition’s work and progress. His executive assistant did not notify him of a message left with her requesting an interview, he said.

In 2020, the city of Cleveland created a working group to address racial equity, on the heels of declaring that racism is a public health crisis. Now two years later, very little is known about the city’s public-private task force. The Racism as a Public Health Crisis Coalition (RAPHC-C) has been operating behind closed doors, shielded from public view by city officials.

“From the very beginning when I joined this, there has never been a public component to this,” said coalition chair Marsha Mockabee, the president and CEO of the Urban League of Cleveland, which serves as RAPHC-C’s fiscal sponsor. “And of course, when COVID hit, then that sort of really challenged the public piece.”

That secrecy can be a problem because it erodes trust and prevents the coalition from benefiting from public input, said Nora Kelley, a Ward 17 resident and activist.

“There can be big blind spots,” Kelley said. “You can also have a degree of groupthink, even with people that are committed, that are thoughtful. That iterative, broader base process is really critical to sort of rounding out a full understanding of what are really complicated, thorny social issues.”

The resolution passed in 2020 that declared racism a public health crisis, in Cleveland, also established a working group to promote racial equity.

At that time City Council President Blaine Griffin, who was one of the resolution’s primary sponsors, called for visible change.

“Now that we understand that we have this public-health crisis, we have to do something about it,” Cleveland.com quoted Griffin as saying during the council meeting that declared racism a public health crisis. “Whatever we do, we have to make sure that the citizens of this city touch, feel, hear and see real change.

But two years later, little information is available about what specific steps Cleveland has taken to address the problems – and city and civic leaders are mum about what the coalition is planning and even when it meets.

Mockabee, who agreed to an interview and provided some details on the coalition’s work, does not work for the city. Neither Griffin nor Cleveland’s Mayor Justin Bibb provided information about the coalition for this report.

Other media outlets have also been denied access to these meetings. Last year, a local television station asked if they could sit in on a racial equity meeting. Griffin reportedly denied the request.

Ward 9 Council Member Kevin Conwell, who chairs council’s Heath, Human Services and the Arts Committee, said in a phone call that he wasn’t sure what the coalition had been up to but that his committee has a hearing scheduled with RAPHC-C leaders on May 9.

The stakes are high for many residents. In Cuyahoga County, Black people live six years fewer than white residents, on average and are more likely to suffer from chronic conditions like asthma, high blood pressure and diabetes, according to data from the Center for Community Solutions.

Racism is a threat to public health because it creates policies, practices and norms that unfairly disadvantage people based on the way they look or the color of their skin, the Centers for Disease Control and Prevention says. Those structures negatively affect the mental and physical health of millions of people across the country, and a growing body of research shows that centuries of racism affect whether people have access to social and economic benefits like housing, wealth and employment, which are key drivers of health inequities because they place people of color at greater risk for poor health outcomes, according to the CDC.

“We need to build this plane and fly it at the same time,” she said. “We really do kind of know what we’re supposed to be doing, and we’re going to fail forward. We’re going to not get it all right, but we really need to get the work moving.

Thus far, Mockabee said the coalition, which is made up of volunteers, has worked to create its structure and secure funding.

“It’s been messy, as all this kind of work always is,” she said. “It has been really trying to develop your foundational documents, your policies and procedures about how you’re going to operate.”

The group recently secured a $200,000 grant from the city’s general fund, according to a spokesperson for city council. The coalition also received a $125,000 grant from JPMorgan Chase, said Mockabee.

The coalition plans to use $200,000 to hire a project manager and has hired the ThirdSpace Action Lab, a grassroots research, strategy and design cooperative located on the border between Cleveland’s Glenville and Hough neighborhoods to further plan the coalition’s future, she added.

RAPHC-C has already created a seven-month plan that will begin in May, according to Mockabee. It is not clear, what the plan includes, who drafted it, or whether ThirdSpace Action Lab was a part of the process. Mockabee declined to release the plan because she said Cleveland Mayor Justin Bibb and the city council have not yet signed off on it.

Will the public be included in creating the racial equity plan?

Mockabee said that the public will eventually be included in the group’s work. The coalition is planning to bring on three “community organizations,” including the Neighborhood Leadership Institute, by the end of May to help it develop a community engagement plan, she said.

“Absolutely in the plans that we make — which have not started yet — there will be a strategy to engage citizens in the racial justice work in those systems that are external,” Mockabee said. “But [city council’s resolution creating the coalition] doesn’t talk anything about the fact that the meetings are public.”

Operating in secrecy can undermine efforts to address racism as a public health crisis, said Catherine Turcer, the executive director of Common Cause Ohio, a Columbus-based government accountability advocacy group.

“Operating in as transparent a fashion as possible is good public policy so that we can all start having uncomfortable conversations,” Turcer said.

That transparency allows leaders and the public to identify and correct mistakes, she said.

“We also know that this is hard work,” Turcer added, “and it’s important for the public to see it.”

Public input and government transparency have long been points of contention for many Cleveland residents and local politicians. Last year, city council approved public comment at its meetings, a given in many other cities.

“We need to provide folks with the tools so that they can participate,” Turcer said.

Turcer said it’s not unusual that the group has taken two years to figure out the logistics of how it will operate, but she pointed to the Ohio Constitutional Modernization Commission, which was killed by the state legislature after it took too long to streamline the state’s long and dated constitution.

“I do think thoughtful planning about logistics is important,” Turcer said. “But sometimes, what happens is you plan so long, you never actually get to the thing.”

The executive committee is made up of the following individuals:

● Chair: Marsha Mockabee – President and CEO of the Urban League of Greater Cleveland

● Danielle Sydnor – Outgoing President of the Cleveland branch of the NAACP

So far, most of the group’s meetings have been spent creating its structure, Mockabee said. The coalition has identified five focus areas and assigned co-chairs to each. Different groups are now working to identify how to promote equity in each of the following areas:

CORRECTION: A previous version of this story incorrectly reported that the coalition received federal COVID-19 stimulus funds. The funding came from the city of Cleveland’s general fund.