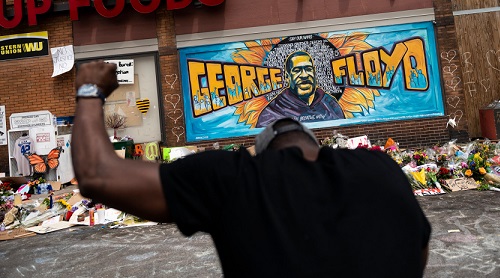 Despite his death galvanizing nationwide racial justice protests, law enforcement continues to brutalize Black folks the same way as they ever did.

On May 25, 2020, George Floyd died at the hands of former Minneapolis police officer Derek Chauvin who kneeled on his neck for 9 and a 1/2 minutes. As Floyd pleaded for his life, even letting out an exasperated “I can’t breathe,” shocked bystanders looked on—one of them even recorded the murder.

Darnella Frazier, who was just 17 years old at the time, captured the ordeal on her cameraphone and it immediately went viral on social media. It also galvanized the nation into action. Millions of demonstrators took to the streets—across the country as well as the world—to protest a stark reality that Black Americans have always known: we die at the hands of cops at higher rates and always for no reason.

Despite the breakthrough surrounding public consciousness, Black people are still being murdered on camera by cops with no end in sight.

Calls to defund the police led Minneapolis City Council members to announcing tentative plans to replace their local department, though voters rejected the ballot measure. No-knock warrants were banned in Florida, Oregon, Connecticut and Virginia while other states severely limited how they could be used.

A total of 17 states, including Minnesota, enacted legislation to ban or restrict chokeholds. Yesterday, President Biden signed an executive order designed to reform federal police practices and establish a national database of police misconduct. However, past tools that have been implemented—such as body cameras—do nothing to prevent cops from killing Black people.

“I know progress can be slow and frustrating and there’s a concern that the reckoning on race inspired two years ago is beginning to fade,” Biden said. “This is a call to action based on a basic truth: public trust, as any cop will tell you, is the foundation of public safety. Without trust, the population doesn’t contribute, doesn’t cooperate.”

What Biden has failed to address is that there is no fixing a historically racist and corrupt institution like law enforcement. That real action from Congress would be way more effective in addressing America’s policing crisis. That countless Black people continue to be murdered at the hands of cops and have rarely been held accountable.

Chauvin wound up receiving 22.5 years in prison for Floyd’s death and undoubtedly that sentence was an indirect result of public outrage. His punishment won’t bring Floyd back nor undo the trauma his loved ones—and Black people everywhere—have suffered.

As the Biden administration insists it’s making progress when it comes to how they treat Black folks, the ones they have murdered after the Floyd protests stand in contrast to these erroneous claims. Daunte Wright, Amir Locke, Jim Rogers, Patrick Lyoya, Tracy Gaeta and numerous other innocent victims lost their lives at the hands of racist police officers; officers who continue to face no repercussions for their heinous actions.

The legacy of George Floyd is a complex one. Two years later, not only has this country failed to honor his memory—it disrespects it by pretending to change a system that profits off the bodies of Black people.