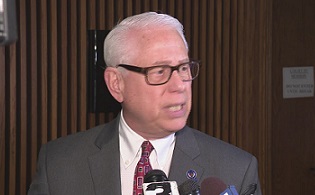 Cleveland City Council hopes to take back Cleveland streets: they unanimously passed an emergency ordinance that creates a harsher punishment for dirt bikes.

It goes into effect immediately.

It increases penalties and fines for illegal dirt bikes and unregistered vehicle riding to a range of $500 to $1,000 and makes it a first-degree misdemeanor.

Michael Polensek, Ward 8 Councilman and Safety Committee Chair, is a co-sponsor of the ordinance.

“Not only do we have individuals from our own city disrespecting our neighborhoods, we have people coming in with the drifters from the suburbs thinking they can do whatever they want,” Polensek said at Monday’s City Council Meeting.

Blaine Griffin, City Council President, said many residents are frustrated and intimidated by the riders.

“These are for the ones that are blatantly disrespecting the laws,” he said. “We want to make sure that we send a message to the guys that are really intimidating our public.”

The new ordinance not only increases the penalty but also specifically mentions riders of unregistered vehicles can’t block intersections with stunt-riding or trick and cannot make ‘unreasonable’ noise in residential areas.

Both Polensek and Griffin noted that the ordinance was a step in the right direction and one that they hope sends a message to illegal riders.

“We are going to start to enforce the laws that should’ve been enforced a long time ago,” said Polensek.