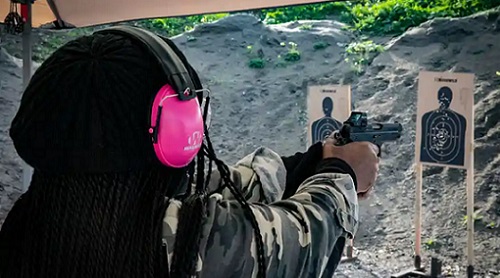 Two days after a white man shot and killed 10 Black people in Buffalo last month, Michael Moody reversed his thinking about possessing a firearm. He had watched the aftermath of the carnage on the news, the anguish of the victims’ families, and decided he “needed a gun. Needed, not wanted,” he said.

After discussing it with his wife, Moody said he left his home in suburban Washington to buy a weapon. He quickly learned he wasn’t alone. He said he was “stunned” at the number of Black people standing in line at the gun shop in Maryland to make a similar purchase.

Through chatting with others while waiting, Moody said he learned “a lot of us have the same idea. It’s getting bad when someone specifically targets Black people to shoot. We have to be prepared to fight back. And you can’t survive bringing a knife to a gunfight.”

Moody’s sentiments represent one reason the sale of guns to Black Americans rose 58 percent in 2020 — the year George Floyd was murdered by a Minnesota police officer, sparking a nationwide social justice movement — according to the National Shooting Sports Foundation, a firearms trade association. It was the highest bump in gun sales of any ethnic group that year.

Further, in the first quarter of 2021, another NSSF report revealed 90 percent of gun retailers reported a general increase of Black customers, including an 87 percent increase among Black women.

“And you wonder why?” said Moody, who works for the federal government. “You look at Buffalo and the feeling of ‘This could have been me’ is there. We could be the next target. And when it’s you, what are you going to do? Are you going to run and hide? Or are you going to be able to protect yourself? Protect your family? I didn’t want a gun; I’m not a gun person. But this world has made me get one. Getting one for my wife next.”

The foundation said 40 percent of the overall gun sales in 2020 were to first-time gun purchasers. Black gun owners, old and new, say the rise is a byproduct primarily of a heightened fear they could be targeted like those in Buffalo or at Emanuel A.M.E. Church in Charleston, South Carolina, in 2015, when nine Black church members were killed by a white supremacist.

To that point, anti-Black hate crimes rose nearly 40 percent in 2020, the latest year available, according to FBI statistics. There were 2,755 reported incidents targeting Black people in the U.S. that year, the most besieged racial group by a large margin.

Two weeks after the Jan. 6, 2021, riot on the Capitol in Washington, Destiny Hawkins, a divorced mother of one who lives near Atlanta, waited in line to purchase her first gun, a Glock 43. “It wasn’t the gun I wanted because their selection was so low; people were buying guns like crazy,” she said.

“But seeing those people climb the walls and attack the Capitol — on top of all the other shootings of Black people — just confirmed why I stood in the cold and got my firearm. The bottom line is that we have to protect ourselves and our homes. But we purchase guns differently,” Hawkins said, stressing the sense that more Black people are buying guns for the sake of protection against racial attacks. “I drove a long way to take safety classes,” she added. “I went to the range.”

This increased interest in firearms delights Philip Smith, who started the National African American Gun Association in 2015. A human resources executive in Atlanta, Smith said he owns “about 30” weapons, including the lethal AR-15-style rifles used in the Buffalo mass shooting and the Uvalde elementary school massacre in Texas on May 24.

The increased number of Black gun ownership represents “an awakening,” Smith said. “It’s a value-add to their family household, as opposed to, let’s say, 10 years ago or six years ago. This is a movement in a certain direction, and I think it’s a good direction.”

His organization has 48,000 members nationwide, he said, and has gained more than 1,000 or more each month since 2020. It has nearly 107,000 followers on Facebook. Smith said the murder of Floyd, compounded by the myriad shootings of Black men and women by white police officers, vigilantes and the like, sparked the surge.

“There’s been a polarization racially and politically that’s driving that narrative for Black people purchasing guns for protection,” Smith said. “Folks are saying they don’t want to be out in public without a gun or they might end up like Ahmaud Arbery or Trayvon Martin or countless others who have been killed in the streets.

Zhé Parson developed an affinity for guns when she was growing up in rural Petersburg, Virginia. Her father, grandfather and uncles all carried guns and taught her how to use one. The owner of three firearms, Parson started a Facebook group called Black Women With Guns as a way of subtly encouraging her peers to embrace arming themselves.

“It’s a safe space for Black women to come to be educated about gun usage, gun safety and protecting yourselves,” Parsons said. “It’s a sisters-in-arms space. We’re taking a step to make sure our families are safe. A lot of people of color don’t necessarily want firearms in their possession or anywhere near their children or their family because of fear something could happen. A lot of that is about not knowing about gun safety. But the numbers are going up because of one thing: Black people, Black women included, want to protect themselves.”

Smith of the gun association said the pandemic and the racial justice movement created an atmosphere that pushed Black people to legally arm themselves — and it is not slowing down.

“During the heart of Covid, I heard from so many people asking me to suggest guns for them to buy,” he said. He said they were scared about “the social breakdown: mob violence; shortage of food; gas prices rising. Lines were long. Then there’s the social unrest that was going on and those forces made our community collectively say, ‘You know what: I’m going to get a gun.’ And I think all that is a good thing.”

When Smith moved to Atlanta from California in the early 2000s, he noticed that his dentist, lawyer and accountant all possessed guns. For 13 years he refused to engage them about firearms. Then, one Friday after work, he gave in and went to the gun range with two co-workers. “Just to shut them up,” he said. “But I had one of the greatest times in my life. I stayed there about three hours.”

After a second fun experience, Smith decided to start his organization. “If I could have fun as an African American male, with no training, no connection to guns at the gun range, I figured other Black people like me across the country would enjoy being introduced to guns.”

On a napkin, he wrote down what his gun organization would be, with the emphasis on gun safety, self-defense and the history of Black gun ownership, all expressed on its website, which also features the Black Panthers, the Tuskegee Airmen, Harriett Tubman and more

“We share about all these Black heroes and we let the visitor know that they had a gun and their liberation or death mentality,” Smith said. “That history is something you can be proud of. And nobody can shame you for that reality.”

Hawkins from Atlanta said the shame would be in the guns getting into the wrong hands or being used for purposes other than to protect.

“Everyone shouldn’t have a gun,” she said. “I’m OK with figuring out legislation to make sure people who pose an obvious threat aren’t able to get a license. Just because you meet the requirement of age and basic background check doesn’t mean you should be able to possess a firearm.”

Smith does not disagree. His organization has 120 chapters across the country and it has trained more than 7,000 Black women in the last year on how to safely use a gun.

“Having a gun is OK as long as it’s done in the right way,” he said. “We try to use a lot of images and imagery that really connects our people to good experiences and positive images for families, for husbands, for mothers, for kids. It’s something we should embrace and use that positive energy in a legal, law-abiding way.”