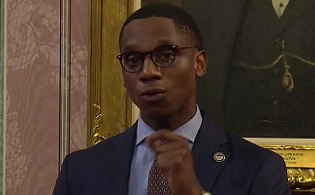 So far this year, Cleveland police have responded to 495 shootings and 61 homicides, 52 of which are gun-related, according to officials.

“We’re seeing victims from ages 3 up to 101 years old, and our children, our children are becoming victims of negligence and victims of thoughtless gun violence,” Bibb said at a Tuesday afternoon news conference.

With tears streaming down his face in an emotional moment, interim Chief of Police Wayne Drummond spoke specifically about the recent death of Cayden Williams. The 10-year-old was killed on East 77th Street when police say a gun being handled by his aunt went off. The bullet traveled through the ceiling to the second floor, striking him in the head, according to police.

“Here’s a 10-year-old that’s dead,” Drummond said. “His family’s life is changed forever, and I just, life has to go on, we all know that. So, as a police officer for 33 years, I’m thinking to myself, what can I do?”

One goal to combat gun violence, Drummond said, is for officers to interact more with the community.

“Getting our officers out of the cars, and that’s primarily on our first shift and our second shift, to actually go out and engage with the community,” he said. “And I’m not just talking about parks. I’m talking about neighborhoods.”

Drummond also touted technology and information through the real time crime center as part of the solution.

The city also plans to increase security at entertainment venues Downtown to protect against mass shootings, and Director of Public Safety Karrie Howard added, Cleveland is working on a comprehensive training across first responder agencies in case of an active shooter.

Saying he feels paralyzed and handcuffed by the lack of gun control legislation, Bibb criticized state leaders for allowing teachers to be armed and urged schools in the region to ban guns in their buildings.

“In working with CEO Eric Gordon and our school board, we will no longer allow any weapons, once this bill is passed, we will not allow any weapons inside CMSD (Cleveland Metropolitan School District),” Bibb said, referring to Ohio House Bill 99, which lowers training requirements for armed personnel in schools from more than 700 hours to 24 hours.

Bibb also said he’s instructed his law director to look at options for the city to counter the state’s permitless carry law, which goes into effect in Ohio on June 13.

As negotiations around gun legislation are underway in Washington, Bibb encouraged all residents to call their representatives.

“Congress needs to act and every citizen in this city and in this state should plead with a member of Congress to take action now,” he said. “This is madness.”