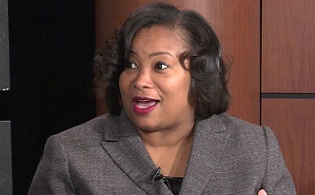 Melissa McFadden was awarded $1 in damages for discrimination and $1 for retaliation after claiming she was targeted by supervisors.

An Ohio jury ruled in favor of a Columbus police official’s racial discrimination lawsuit — however, they awarded her only $2 in damages.

The saga began in 2018 when Lt. Melissa McFadden — who is Black — was accused of fostering an “us against them” attitude between Black and white officers and creating a hostile work environment, according to NBC 4. She was investigated by the Columbus Police Department’s office of internal affairs and subsequently recommended to be fired by CPD Chief Kim Jacobs.

Columbus Police Lt. Melissa McFadden poses for a portrait at her home in January 2019. She filed a lawsuit and spoke out against discrimination in the police force. In September 2020, she released a book about her experiences. (Photo: Fred Squillante/Columbus Dispatch via Imagn Content Services, LLC)

However, Ned Pettus Jr., then the city’s safety director, who retired last year, ruled in McFadden’s favor and returned her to work.

McFadden then filed a lawsuit against Columbus, and a jury in the U.S. District Court for the Southern District of Ohio found evidence that the city had both racially discriminated against and retaliated against McFadden, violations of the Civil Rights Act of 1964 and the Ohio Laws Against Discrimination.

The police lieutenant — a union representative for her fellow CPD officers who’d aided in a Black colleague’s 2016 complaint — had asked for $25,000, plus her lost wages and legal fees. The jury ruled in her favor, yet awarded her only $1 for the discrimination and $1 for the retaliation, equaling $2. The verdict form did not explain their ruling.

McFadden has been out of work due to a torn rotator cuff and herniated discs in her neck, claiming she was injured when she was demoted from her position in leadership, and instead ordered to toil under a civilian property room clerk. If permitted by her doctor, she could return to work in October.

“I was tasked with taking the covers off old, expired bulletproof vests,” McFadden previously told NBC 4. “I would take off the covers, tape the panels together and stack them on pallets. And I had to stack them every day for eight hours a day.”

McFadden wrote a memoir in 2020 titled Walking the Thin Black Line: Confronting Racism in the Columbus Division of Police, in which she claims “racism hides within police culture, because the purpose of policing has never shed its original focus — a war on Black people.”

In the book’s description on Amazon.com, it’s noted that McFadden “never imagined the day that she would be standing in solidarity with young Black activists and their white allies, holding a sign saying Police Reform Now, while shouting BLACK LIVES MATTER!”

McFadden has not yet commented on the jury’s verdict.