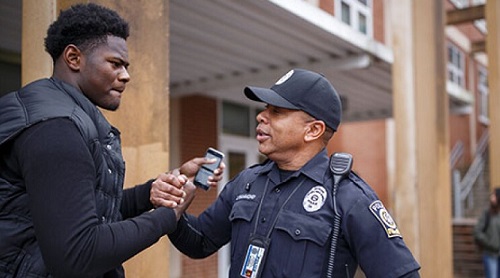 The fear of most Black parents is now shrouded in a double threat of potential harm.

Every time there is news of a mass shooting in this country, we go through the same cycle. In the beginning, there is outrage, and by the end, nothing seems to have changed but the number of hashtags on our social feeds in honor of the dead. In the middle of this worn and tired cycle are conversations about new laws, and new public safety measures. Most of which revolve around gun control, and policing. In the wake of the most recent school shooting in Uvalde, TX, The Washington Post reports that republican lawmakers are being called upon to place more police and armed security in schools. While some white parents are fearful of the idea of more guns entering school buildings, Black parents are having to reckon with the possibility of there not only being more deadly weapons around their children, but more police as well. For a community whose relationship with law enforcement is already so fraught, parents of Black and Latin X children are more terrified than ever.

Shane Paul Neil, a 44-year-old father of two thought of his own children as most parents did, in the days following the massacre of 19 children at Robb Elementary School in Uvalde. As he grappled with the possibility of a double threat in his children’s schools — increased chances of random gun violence, as well as racial profiling by police — he voiced his fears online in a tweet that has now gone viral. “As a black father I now have two potential threats to be concerned over.”

“For White parents it was, ‘we don’t want to bring more guns into school,’” he told The Washington Post. “For myself and other Black parents, it’s that we don’t want to force police interaction in school with our children in particular.”

Statistics show that Black and Latin X students are suspended and expelled at significantly higher rates than their white peers. They are also most likely to be arrested both in and outside of the classroom, at times leaving them with a record that stays with them into their adulthood. “It only takes one incident for my son or daughter to have an arrest record, a juvenile record,” Neil says, “and those things stick with you, they follow you.”

For Natalie Moss, the mother of two preschool aged children, the thought of turning teachers into “de facto law enforcement” doesn’t sit well with her and her husband. “There’s a culture of adultification bias against Black children,” she says. “They’re cute when they’re 2 or 3. But when they reach a certain height, it’s different. My child is in the 99th percentile for height — he’s on par with most 6-year-olds in terms of height, so when people approach him, they often think he’s older than he is, already.”

Moss also speaks on the history of distrust between the police and oppressed people as it relates to the unfolding details and changing stories from the officers present that day in Uvalde.

“I think that what people have to pay close attention to is how these changing stories bring distrust in law enforcement, particularly in the African American community as well as communities of color,” Moss says. “I have all these questions. How do I know what’s true and what’s not? As a Black parent, what about any of this would evoke any level of confidence that more police would benefit my Black sons?”

Beatriz Beckford, national director of the social welfare organization Moms Rising charges us all to be more imaginative when it comes to the consideration of public safety. “There’s not enough space to dream beyond a world where we rely so heavily on police for everything,” she says. “We rely on them to discipline in the classroom. We rely on them to intervene when there’s a mental health crisis.” We must find the balance. Our lives, and the lives of future generations depend on it.