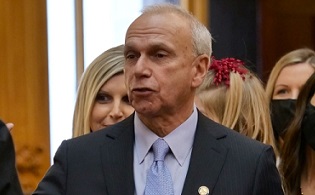 Ohio funeral law, especially governing prepaid contracts, is getting a lot of adjustments under a bill Gov. Mike DeWine has signed.

Under the new law, when there’s money left over from fulfilling a preneed funeral contract, the funeral provider must put it into a trust or buy insurance to pay for other preneed funerals. If a preneed funeral trust pays for funeral services provided by a third party, the person with the right of disposition of the body may need to make any additional payments, says an analysis of the bill by the state Legislative Service Commission.

Money paid into a preneed funeral contract will go into the state’s unclaimed funds pool at the end of the year a contract-holder would turn 105, unless it’s proven within six months that person is still alive. The fund is managed by the state treasurer.

Leftover money from a preneed funeral that the trustee was unable to pay to a person’s heirs within six months of the person’s death goes into the unclaimed funds pool.

There is a $10 fee for preneed funeral contracts, except those paid by insurance. Those fees go into the Preneed Recovery Fund, which reimburses people who were cheated by preneed salespeople. The fund contains about $800,000, and has paid out roughly $30,000 for seven claims, according to a state fiscal analysis.

Additionally, the law will require the State Board of Embalmers and Funeral Directors to study other states’ trust rules for buying coffins in advance, and report to legislators within three months of the bill’s effective date.

State Sen. Jerry Cirino, R-Kirtland, collaborated with the funeral industry on Substitute Senate Bill 224. He introduced it last September, and it passed the Senate 29-1 in March. An amended version passe the House unanimously on June 1, and the same day the Senate concurred with those amendments.

“Not only is SB 224 a business-friendly proposal, but it is a consumer-friendly proposal,” Cirino said in a news release. “All of the proposed changes in this bill will benefit the more than 900 funeral homes in the state of Ohio, while simultaneously ensuring consumer protections are provided to the thousands of families that rely on funerary services.”

Kirk Roberts, president of the Ohio Cemetery Association, told legislators his group opposed the bill in the Senate due to several provisions that were “anti-competitive and detrimental to cemeteries and consumers.” But amendments removed all the objectionable parts, and the association began supporting the bill.

If a funeral home or crematory closes, it must notify “various parties” of any unclaimed cremated remains. From now on an ID tag on cremated remains must only be attached to vessels that contain all the remains, or “more than 10 cubic inches” of remains.

Until now the board of embalmers and funeral directors has been allowed, but not required, to set conditions for “courtesy card” permits from adjacent states. Now that allowance will become mandatory. Those cards give an embalmer or funeral director permission to transport bodies to and from other states for services and burial.

The board has been able to approve Ohio licenses for out-of-state embalmers and funeral directors, but hasn’t been required to. Now that will be mandatory, so long as the applicant is qualified in another state.

Previous denials of qualified applicants “would appear to be rare,” the LSC found.

The new law disqualifies someone from managing a person’s funeral, cremation or burial if:

—They refuse financial responsibility for it; or

—They don’t claim that right within 48 hours of learning the person is dead; or

—They don’t claim that right within 72 hours of the general discovery that the person is dead.

It makes the law for disposition of a child’s body when there are no written wishes the same as for an adult’s body.

Finally, the law now authorizes hearses and an escort vehicle to add a “flashing, oscillating, or rotating purple light” to their currently allowed amber light.