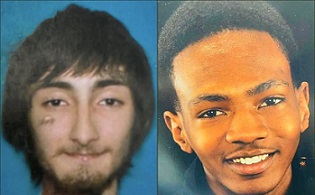 The Highland Park parade shooting came one week after Akron cops shot and killed a Black driver suspected of nothing close to a deadly mass shooting.

Police in Illinois not only managed to safely apprehend a “person of interest” — don’t call him a “suspect” — identified following a deadly mass shooting at a Fourth of July parade but they also apparently didn’t even fire off a single shot during the arrest on Monday.

The treatment of Robert “Bobby” Crimo III, who led police on what the New York Times called “a brief chase” before his arrest, pales in comparison — pun intended — to what happened to Jayland Walker, a Black driver in Ohio whose body was riddled with at least 60 bullet wounds after cops let off a barrage of shots during and after an apparent brief chase just one week earlier.

Police said Walker, 25, committed unspecified traffic violations which led to officers attempting to pull him over on June 27 in Akron. Initial reports were that police shot at Walker more than 90 times. The Akron Beacon Journal described shots hitting Walker in the face, arms, legs and abdomen. The outlet also shared a note from the medical examiner’s report that Walker was handcuffed after being shot. Officers initially claimed that a gun was fired at them from Walker’s vehicle but there was no gun found after he was shot. The police narrative has since been in heavy dispute.

Now, compare that to the manhunt for and arrest of Crimo — who remains the lone person of interest in the shooting in Highland Park, a suburb of Chicago — and how not one single officer ever even felt compelled to pull their triggers after a *checks notes* brief chase of someone believed to be armed and dangerous.

The fact that Crimo’s violence-less arrest came on the 4th of July seems appropriate since protecting violent white people as seemingly as American as apple pie.

It was all but a repeat of how accused murderer Payton Gendron was able to be safely arrested after allegedly carrying out the targeted massacre of 10 Black people in May at a supermarket in Buffalo, New York.

After Crimo’s name became public, photos identifying him surfaced on social media showed he attended at least one rally supporting former President Donald Trump, who has been widely blamed for inciting violence in the U.S., including and especially at the U.S. Capitol on Jan. 6, 2021.

Notably, Gendron left behind a manifesto that cited the racist so-called “white replacement” conspiracy theory that has been vehemently pushed in one way or another by the likes of Trump, Fox News host Tucker Carlson and Texas Lt. Dan Patrick, to name but a few.

The motivation for the shooting in Highland Park was not immediately clear. At least one of the fatal victims was identified as a “Mexican national.”

Pretextual traffic stops like the one described by police in its attempt to pull over Walker virtually match those involving other Black drivers that led to their deaths. That includes Patrick Lyoya, a 26-year-old Congolese refugee who was shot in the back of his head following a slow foot chase during a traffic stop for vehicle registration issues in Michigan on April 4. In that case, Grand Rapids Police Officer Christopher Schurr was ultimately charged with second-degree murder.

Months earlier, former Minnesota police officer Kim Potter was sentenced to two years in prison for purportedly confusing her Taser with her gun when she killed Daunte Wright, a 20-year-old Black driver who was pulled over for a traffic violation related to expired registration tags — a nonviolent alleged offense that amounted to a death sentence.

The shooting in Highland Park came less than two weeks after a U.S. Supreme Court ruling effectively made it easier to carry concealed guns in public in a majority opinion penned by Associate Justice Clarence Thomas.

The Highland Park shooting is one of more than 300 mass shootings this year, including at least six on Monday in which a total of at least seven people were killed and 54 others were injured, according to statistics from the Gun Violence Archive website.