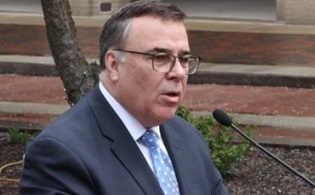 Envelopes of what is believed to be human feces were sent to each Republican member of the Ohio Senate, according to a spokesperson for the majority caucus.

As first reported by The Columbus Dispatch, some deliveries were caught by postal workers in Cleveland and Akron, while others were discovered by employees that work in the mailroom of the Ohio Statehouse. None of the 25 envelopes made their way directly to a senator’s office.

Fortney called the senders “pathetic, little cowards” and added that “They should’ve just sent a selfie, because it’s the same thing. I’d be more than happy to explain it to them in a parking lot or cornfield of their choice.”

Officials have not confirmed if there was a message that accompanied the packages and Fortney said the motive behind the deliveries was unclear.

“It is another manifestation of the angry society in which we live,” said Sen. Kirk Schuring (R-Canton). “People are mad for a wide variety of reasons that spread across the entire political spectrum.”

Fortney said the Ohio State Highway Patrol has been notified and that the safety of every senator — on both sides of the aisle — as well as senate staff and Statehouse employees, remains a priority.