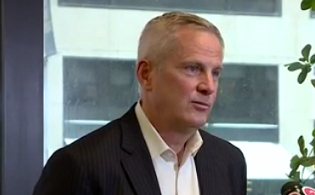 Basheer Jones, a former Cleveland City Council member and 2021 mayoral candidate, announced his support for Weingart on a street corner in Hough, the neighborhood he once represented on council.

Jones accused Democrats of not doing enough for the county’s Black neighborhoods. He said he was backing Weingart despite the “baggage” of his disagreements with the national Republican Party.

“Resources, that’s it. That’s the only ‘R’ that I care about, is resources,” Jones told media at the corner of East 79th Street and Hough Avenue. “What resources will come into our community?”

The former councilman said he met with Weingart, the head of lobbying firm LNE Group, and believed the Republican understood his concerns about his neighborhood.

“I’m not turning in my Democratic card, so to speak,” Jones said. “But I am putting the party, locally and nationally, on notice. And that is that there is a shift happening within the Black community. And that shift is, we deserve much more than we’ve been receiving.”

Jones served a single term on council and finished fifth in the seven-way mayoral primary last year. He said he would spread the word about Weingart in the wards that he won last year, which cover the near east and northeast sides of Cleveland.

“I’m going to be letting them know, ‘Hey, don’t worry about Republican or Democrat. I want you to listen to Lee, hear what he has to say, and if it’s makes sense, I’m asking you to follow your heart,” he said.

Jones, who has a substantial social media following, made a similar pitch for then-Council President Kevin Kelley in last year’s mayoral general election. But that did not stop Justin Bibb from notching substantial victories in majority-Black city neighborhoods.

Weingart said his campaign hopes to win over Democratic voters, particularly on the city’s East Side. Republicans face an uphill climb in the heavily Democratic county. GOP candidates have lost all three races for Cuyahoga County executive since the position was created as part of a county government overhaul in 2009.

Jones left office when he term was up at the end of 2021. Earlier this year, Cuyahoga County Executive Armond Budish appointed him to serve on the Alcohol, Drug Addiction and Mental Health Services Board.