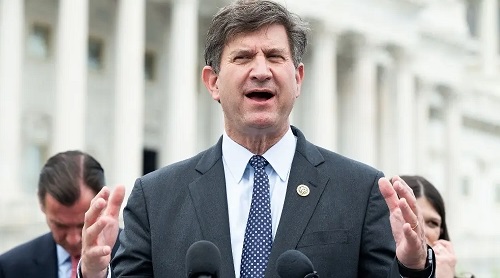 The House passed an amendment to the National Defense Authorization Act to push government officials to report instances of white supremacy among the military and law enforcement ranks, The Hill reports. Rep. Brad Schneider (D-Ill.)’s sponsored measure made it through with a 218-208 party-line vote that saw every House Republican vote against it. 20% of participants arrested for involvement in the Jan. 6th Capital riot are military veterans. A Reuters investigation also found a high number of police instructors have ties to right-wing militias and white supremacist hate groups.

This amendment would require the FBI director, Department of Homeland Security (DHS), and the secretary of Defense to publish a report analyzing White supremacist and neo-Nazi activity within their ranks and present ways to root it out of the respective organizations.

It also calls for a number count of people who were discharged due to white supremacist activity and requires the government to create a report showing ways how to combat Neo-Nazism within these career choices.

There will be a 180-day deadline for this to be completed and submitted to congressional committees. Unclassified portions would also be made public. Rep. Schneider spoke about the increase in domestic terrorism in the U.S. and how this resolution will be one way to see how bad it is

“This bill helps do that in a simple, effective way. It’s not complicated,” he said during debate on the House floor. “It simply adds a tool to the tool belt of law enforcement all across the country, regardless of their size or location, to be used voluntarily.”

Rep. Andy Biggs (R-Ariz.), known for his election meddling efforts and one of the 23 Republicans who voted against an anti-bigotry resolution in 2019, claimed the measure “denigrates” law enforcement personnel.

“This amendment attempts to create a problem where none exists by requesting investigations into law enforcement and the armed services for alleged rampant white supremacists or white national sympathies,” he said.

Rep. Liz Cheney (R-WY), currently on the Jan. 6th House select committee, also voted against the amendment despite everything she’s seen in the investigation. After the full NDAA passes this week, the House and Senate will conference. At that point, this resolution can still be taken out.