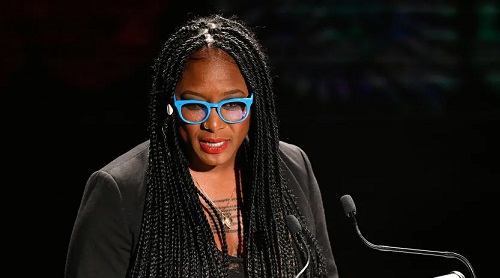 As smoke-filled scenes of the United States Capitol under attack by a group of avowed white supremacists on January 6th filled our television screens, the consensus for many Black Americans was the same, the backlash is here.

“Anytime in history when rights have been expanded for groups of people,” says Garza, “there are these movements that come forward to turn that progress around.”

But what makes this moment in history so terrifying, she says, is the support white supremacists have found from the highest levels of the republican party.

“The republican party has always embraced racism in some ways, but not as openly as they are today,” says Garza. “We now have unabashedly white supremacists serving in our US Congress.”

In case anyone forgot, two Republican representatives, including Marjorie Taylor Greene (R-GA) spoke at a white supremacist rally earlier this year without facing any real consequences (unless you count a stern talking to from the minority leader). And former Republican President Donald Trump, in-addition to having his finger prints all over the January 6th attack, also told white supremacists to “stand back and standby,” for his signal.

Trump, Greene, and several other republican insiders have spouted “great replacement” talking points, a white supremacist theory about “white genocide,” that made its way into the Buffalo shooter’s manifesto.

The Buffalo shooter took the lives of ten Black Americans who were out grocery shopping in a predominantly Black neighborhood in Buffalo, New York this May. The shooting left several others injured as well.

Garza, whose connection to the Black Lives Matter movement has made her a target of right-wing political hate, was also mentioned in the manifesto.

“[White Supremacists] are very wound up and riled up about the success of the Black Lives Matter movement and this generation of the Black liberation movement,” says Garza. “And they’re upset about that because they don’t believe that Black people should have the same rights.”

But as much as Black Americans have always been the focus of white supremacist violence in this country, this is about more than just hatred of Black people, says Garza.

Last month, police arrested 31 armed men connected to the white nationalist group Patriot Front in a U-Haul truck on their way to a pride event in Idaho.

The group was allegedly planning to rile up pride parade attendees and set off smoke grenades. But it’s unclear if the attack would have stopped there had they not been caught.

“This isn’t a movement of people who are unhinged,” says Garza. “These people have been organized, and they’re organized around the idea that somethings being taken away from them, and they have to fight to get it back.”

The fact that they’re hearing that message from the top of the Republican political establishments, well that just makes them all the more dangerous, says Garza.

In part two of our series with Alicia Garza, we discuss her plan to address the rise of white supremacy.